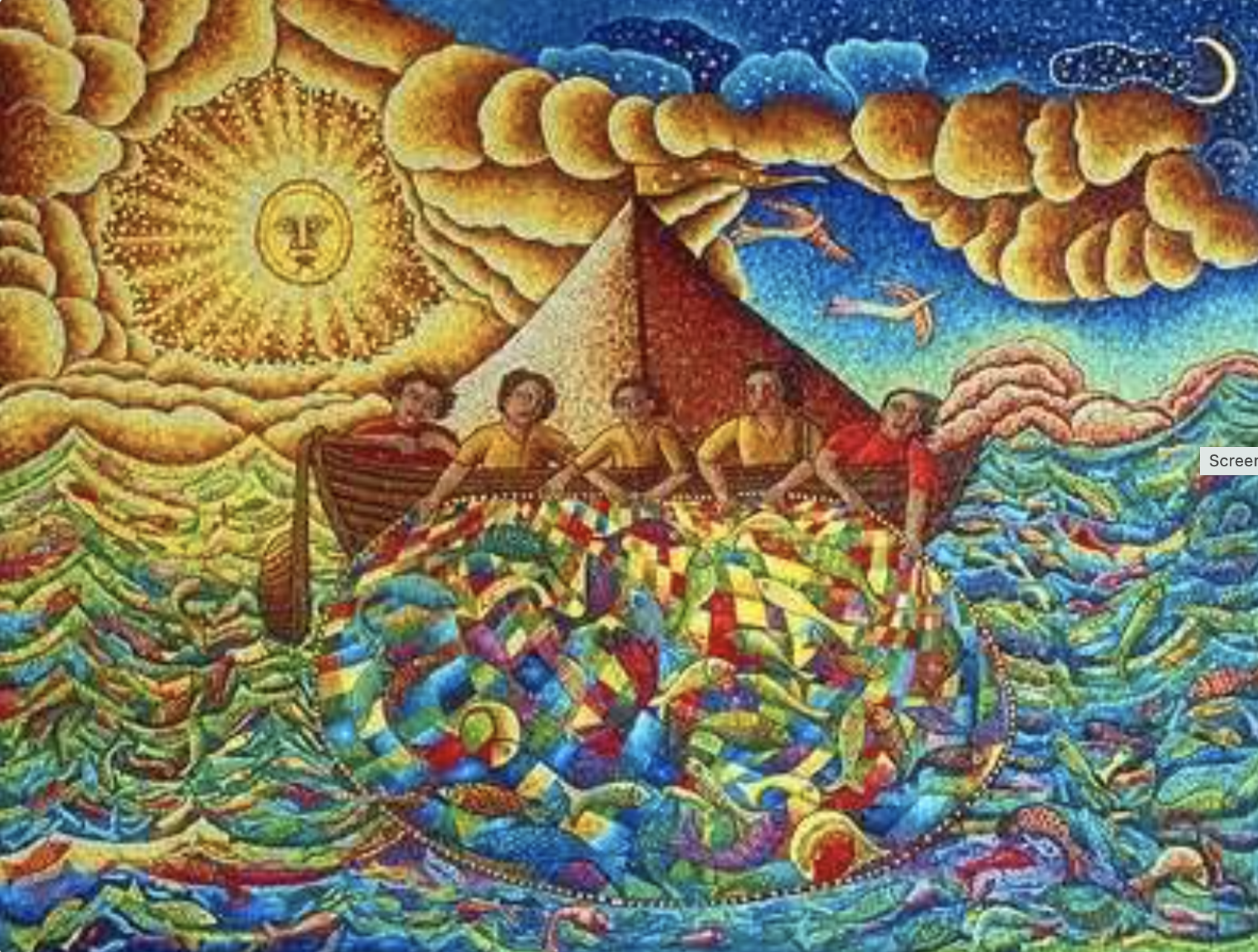 A few years ago I took the opportunity to buy a John August Swanson work – only a print unfortunately, but still full of power, and colour.

Today’s post-resurrection encounter with Jesus reminds me of this great Swanson work “The Big Catch.”

These fishermen previously endured a mere existence in black and white, getting through each day, their daily routines decided by the demands and fears of friends and foes.

But here they are today, still overwhelmed with their limitations (they can’t even catch fish) and feeling shame and guilt at their abandonment of Jesus and his mission, and he comes to them, seeing them as they are, and making them truly productive.

Jesus is among them filling their pitiful existences with the cosmic and eternal colour.of abundant life.

They have heard that he has risen from the dead and he has appeared to them but they are still struggling to know what this means. It’s probable that they are even doubting their earlier experience of the risen Jesus. One sign of their uncertainty is that some of them have returned to their previous work as fishermen.

Peter has already been forgiven by Jesus, and this personal experience of undeserved love has transformed him into a fearless preacher of the power of Christ.

Peter doesn’t pull any punches in today’s first reading when standing as a prisoner before the rulers, elders, scribes and Annas the high priest:

“If you are questioning us today about an act of kindness to a cripple, and asking us how he was healed, then I am glad to tell you all, and would indeed be glad to tell the whole people of Israel, that it was by the name of Jesus Christ the Nazarene, the one you crucified, whom God raised from the dead, by this name and by no other that this man is able to stand up perfectly healthy, here in your presence, today.”

And then early one morning at the Sea of Tiberius Jesus calls to them from the shore: Have you caught anything friends?

After they had proved that they were not good friends (denying, abandoning etc.) Jesus still calls them friends.

I like the ordinariness of the question, “Have you caught anything friends?” Jesus asks them not about their level of faith and love (that will come soon) but about fishing, something they knew about, their ordinary practical human reality.

His question gives them a chance to express their feeling at their lack of success. I imagine that there would have been frustration and humour, and even laughter when Jesus (even though at this stage they did not know this was Jesus) suggests: Throw out the net to starboard and you’ll find something.

Their success was immediate: they dropped the net, and there were so many fish that they could not haul it in leading John to say to Peter “It is the Lord!.”

Think of a similar situation in your own life, a time when you have been working hard with no success.

Now feel the feelings associated with this struggle or failure. Speak to Jesus asking him to show you the way forward, and adding that you want to be clear that his response (even if it comes from an unlikely and unexpected person or thought) is really from him.