At our Masses this weekend, the feasts of the past couple of days, All Saints and All Souls, have been uppermost in our minds. These first November days focus us on life and death, not as a contrasting of opposite experiences, but as human realities that we accept and embrace: death is the path to life.
This weekend, as we prayed around the cemeteries of the Hurunui for parishioners, friends and family who have died, we faced death with all of its tragedy, loss and grief. We prayed with husbands and wives who had buried spouses as long as 40 and 50 years ago. We prayed with parents who had lost one or two children, and we prayed with many who had buried their parents family members and friends. Even when death comes after a long and full life, it is always difficult to farewell those we love.
And then in the scriptures of the weekend Masses we were reminded of the encounter between Jesus and Zacchaeus, and I was reminded of a weekend retreat last month when with a group of fifty friends we reflected on this encounter. The text of Fr. Julian Carron’s Spiritual Exercises of the movement “Communion & Liberation” guided our weekend retreat.
Here is the section where Fr. Carron recall’s Fr. Giussani’s telling of Jesus’ encounter with Zacchaeus. You might find it helpful to take this as a passage of “spiritual reading” or “inspiration.”  The text is the transcription of Fr. Carron’s reflection, then translated into English, so relax about details of punctuation, and expect the Holy Spirit to speak to you as you read. Here goes…

Let’s pay attention to how Fr. Giussani invites us to look, in order to understand. What we lose for not having had the time to look as Fr. Giussani teaches us to look! What gain there would be for our living, for our looking at ourselves, if we behaved like Fr. Giussani, trying to become one with Christ so that our life too is full of that gaze, of that gaze that Christ turns upon Zacchaeus!

Here is how Fr. Giussani tells the episode of Zacchaeus:

“He was the head of the tax collection office, the mafia boss of Jericho and the surrounding area, the head of the tax collectors, those who were con-sidered enemies of the people and public sinners, from whom people had to stay 30 feet away not to be contaminated by the air, sold-out to the Romans. He heard that Jesus was in town, because everybody talked about it in those areas. He passed in front of the crowd and climbed a sycamore, a tree that is not very tall, so he could see Him pass, out of curiosity, to see Him better in the eyes because he was too short.

The crowd comes closer, Jesus is speaking, passes, is there under him, stops, lifts His head and says, ‘Zacchaeus, come down; I’m coming to your house.’ And Zacchaeus: ‘I’m coming.’ Imagine that man who, without speaking, slides down from the tree and runs home. Think of that full silence, with his ear and heart full of the word spoken, of his name: finally his name was pronounced! We can well imagine how that call echoed in everything he did, even when he was in silence, even when he was working in silence. For Zacchaeus, that encounter was a miracle, something that radically transformed his life. Zacchaeus had no fear of losing anything–when he heard ‘Zacchaeus, I’m coming to your house,’ he lost everything he had before his eyes; he was filled by that name.”

Fr. Giussani’s invitation is clear: “We must identify ourselves with the people described in the Gospel. But we do not understand them and we will not manage to identify with what they were, if we don’t identify with Christ who says, ‘Zacchaeus.’ When the word ‘Zacchaeus’ explodes, then we understand Zacchaeus.

When Christ says, ‘Zacchaeus, come down; I’m coming to your house,’ we understand what Zacchaeus was in that moment. Think what Zacchaeus felt, how all of a sudden he measured all his errors without even measuring them, how he felt what he was and Who the man calling him was. Precisely in identifying with Christ we understand what Zacchaeus was. Elsewhere Fr. Giussani observes: “It is this closeness, this presence, not of someone who looks at you from a distance, but of one who looks at you; it is this close- ness that shakes you up, that transfigures your life. Returning home, Zacchaeus did not say, ‘Now this guy is going to tell me that I stole 100 here, 34 there, now….’ He was full of that gaze, went home to prepare lunch for that man, for that fellow there who had looked at him; and after, as a consequence, thought, ‘Here, I’ll give away everything I’ve taken.’ It was a consequence that lasted all his life long, because it is not automatic; each of us knows the impetus with which we give ourselves, and we also know that then we withdraw, therefore, this is the battle of life. But that which allows life to be transformed has become a fact.

Matthew was transformed, the woman, that little group of women, were transformed. Try to think of what the husbands and sons of those women would have said: ‘Are you crazy?!’ Those women had become another thing; Zacchaeus had become another thing; their lives were transformed–they understood that they loved their husbands and sons more, and Zacchaeus understood that he was richer than before, trans-formed, because he was near that fellow there.

It is the opposite of the episode of the rich young man, to whom Christ said, ‘Come with Me’–that is, ‘I want to be close to you.’ And the Gospel says, ‘And he went away sad,’ the rich young man, sad. Either transformed or sad, because you cannot remain immobile, where you were before Christ called, when Christ gave a vocation, when Christ came close to our life, when He asked our life to be His testimony in the world. You cannot be like before: either you become sadder, you sadden even more–even if it seems you breathe better, because you return to doing what is conve- nient for you; you become squalid in a way that is also humanly embarrassing and pitiful–or you are transfigured.”

That Christianity is an event, in experience, means the predomi- nance of a presence–not just any presence, but that Presence able to respond to life’s needs. “To be recognized, God entered man’s life as a man, with a human form, so that man’s thought, imagination, and affectivity were, in a way, ‘blocked,’ magnetized by Him.” Why were they magnetized by Him, by His presence? Because He was the only one able to respond to the needs of life, to the exigency for fulfillment. Christianity as event is the preponderance of the Presence, without which life would be dark, sad, void of a true interest. You cannot live without the Presence. This is the true reason why you seek it continually. Not first of all in order to be “good,” but to live, to be able to stay in front of yourself, to be able to have affection for yourself.

“For your love is better than life.”29 What is this “love” that is worth more than life? For us this love has a name: Jesus. His person is all love. How is it that this Presence prevails so powerfully, notwithstanding all of life’s problems in which we so often get stuck? How is it that He asserts Himself with this simple power, and we can do nothing to avoid it? How is it that not even our evil, our lack of coherence (and that of the tax collectors was great!), can block Him from asserting Himself in our life? Because of the correspondence He finds–fulfills–in the human heart, which can be distracted or reduced, but nothing can block the assertion of that presence, not even for an instant. The first instant can- not be controlled by man. Nobody can impede being struck by a pres- ence, no matter what his or her situation. Nobody can control reality to the point of impeding the surprise of an event. It is so unforeseen that it surprises us with our defenses down, at least for an instant.

So then, what has this to do with need? Why did Jesus say He came for the sick? Because usually only those who have a wound are ultimately open to something unforeseen. Without need, without a wound, one immediately closes any possibility from this unforeseen, trying to put things in order. Need is the necessary condition, not for the event, but for acknowledging it. An event rushes in, happens, irreducibly, here and now, and is not a consequence of antecedents. Need enables us to see the event, to recognize it. As Pope Francis said, meeting the cardinals, “Christian truth is attractive and persuasive because it responds to the profound need of human life, proclaiming convincingly that Christ is the one Savior of the whole man and of all men. This proclamation remains as valid today as it was at the origin of Christianity, when the first great missionary expansion of the Gospel took place.”

Complete Text of Communion & Liberation Spiritual Exercises 2013 at this link. 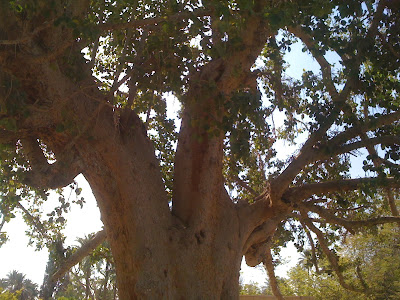 a sycamore tree in the centre of Jericho
and below, the sign at the tree. 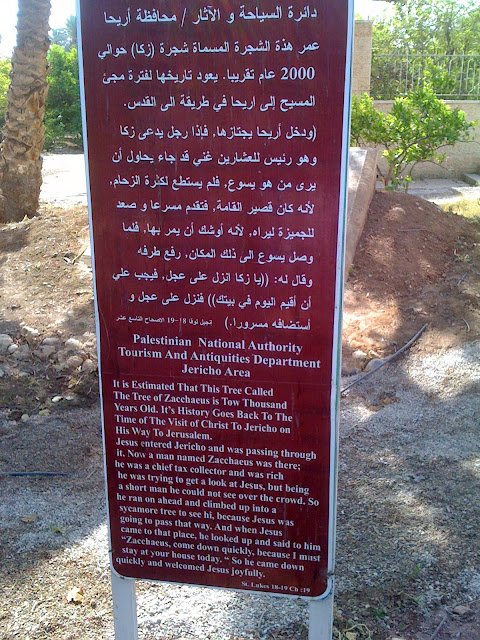