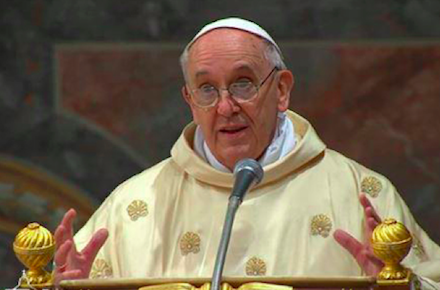 In my Epiphany homily on Sunday I took a guess at what Pope Francis might preach in his Epiphany homily. A few hours ago Pope Francis celebrated the Mass for the Feast of the Epiphany in St. Peters, and in his homily there are a few themes that are common to both of us: the Magi seeking God, the darkness of Herod. My own homily would have been a lot more insightful if I could have heard the pope’s reflection before I preached.

Here is the text of his homily:

“Lumen requirunt lumine”. These evocative words from a liturgical hymn for the Epiphany speak of the experience of the Magi: following a light, they were searching for the Light. The star appearing in the sky kindled in their minds and in their hearts a light that moved them to seek the great Light of Christ. The Magi followed faithfully that light which filled their hearts, and they encountered the Lord.

The destiny of every person is symbolized in this journey of the Magi of the East: our life is a journey, illuminated by the lights which brighten our way, to find the fullness of truth and love which we Christians recognize in Jesus, the Light of the World. Like the Magi, every person has two great “books” which provide the signs to guide this pilgrimage: the book of creation and the book of sacred Scripture. What is important is that we be attentive, alert, and listen to God who speaks to us,who always speaks to us. As the Psalm says in referring to the Law of the Lord: “Your word is a lamp to my feet and a light to my path” (Ps 119:105). Listening to the Gospel, reading it, meditating on it and making it our spiritual nourishment especially allows us to encounter the living Jesus, to experience him and his love.

The first reading echoes, in the words of the prophet Isaiah, the call of God to Jerusalem: “Arise, shine!” (Is 60:1). Jerusalem is called to be the city of light which reflects God’s light to the world and helps humanity to walk in his ways. This is the vocation and the mission of the People of God in the world. But Jerusalem can fail to respond to this call of the Lord. The Gospel tells us that the Magi, when they arrived in Jerusalem, lost sight of the star for a time. They no longer saw it. Its light was particularly absent from the palace of King Herod: his dwelling was gloomy, filled with darkness, suspicion, fear, envy. Herod, in fact, proved himself distrustful and preoccupied with the birth of a frail Child whom he thought of as a rival. In realty Jesus came not to overthrow him, a wretched puppet, but to overthrow the Prince of this world! Nonetheless, the king and his counsellors sensed that the foundations of their power were crumbling. They feared that the rules of the game were being turned upside down, that appearances were being unmasked. A whole world built on power, on success, possessions and corruption was being thrown into crisis by a child! Herod went so far as to kill the children. As Saint Quodvultdeus writes, “You destroy those who are tiny in body because fear is destroying your heart” (Sermo 2 de Symbolo: PL 40, 655). This was in fact the case: Herod was fearful and on account of this fear, he became insane.

The Magi were able to overcome that dangerous moment of darkness before Herod, because they believed the Scriptures, the words of the prophets which indicated that the Messiah would be born in Bethlehem. And so they fled the darkness and dreariness of the night of the world. They resumed their journey towards Bethlehem and there they once more saw the star, and the gospel tells us that they experienced “a great joy” (Mt 2:10). The very star which could not be seen in that dark, worldly palace.

One aspect of the light which guides us on the journey of faith is holy “cunning”. This holy “cunning” is also a virtue. It consists of a spiritual shrewdness which enables us to recognize danger and avoid it. The Magi used this light of “cunning” when, on the way back, they decided not to pass by the gloomy palace of Herod, but to take another route. These wise men from the East teach us how not to fall into the snares of darkness and how to defend ourselves from the shadows which seek to envelop our life. By this holy “cunning”, the Magi guarded the faith. We too need to guard the faith, guard it from darkness. Many times, however, it is a darkness under the guise of light. This is because the devil, as saint Paul, says, disguises himself at times as an angel of light. And this is where a holy “cunning” is necessary in order to protect the faith, guarding it from those alarmist voices that exclaim: “Listen, today we must do this, or that…”. Faith though, is a grace, it is a gift. We are entrusted with the task of guarding it, by means of this holy “cunning” and by prayer, love, charity. We need to welcome the light of God into our hearts and, at the same time, to cultivate that spiritual cunning which is able to combine simplicity with astuteness, as Jesus told his disciples: “Be wise as serpents and innocent as doves” (Mt 10:16).

On the feast of the Epiphany, as we recall Jesus’ manifestation to humanity in the face of a Child, may we sense the Magi at our side, as wise companions on the way. Their example helps us to lift our gaze towards the star and to follow the great desires of our heart. They teach us not to be content with a life of mediocrity, of “playing it safe”, but to let ourselves be attracted always by what is good, true and beautiful… by God, who is all of this, and so much more! And they teach us not to be deceived by appearances, by what the world considers great, wise and powerful. We must not stop at that. It is necessary to guard the faith. Today this is of vital importance: to keep the faith. We must press on further, beyond the darkness, beyond the voices that raise alarm, beyond worldliness, beyond so many forms of modernity that exist today. We must press on towards Bethlehem, where, in the simplicity of a dwelling on the outskirts, beside a mother and father full of love and of faith, there shines forth the Sun from on high, the King of the universe. By the example of the Magi, with our little lights, may we seek the Light and keep the faith. May it be so.