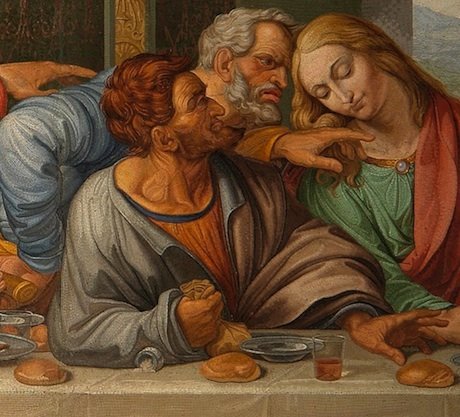 In my preparation for this Sunday’s homily I came across this story about the faces in Da Vinci’s Last Supper.

The story is told that when the painter Leonardo Da Vinci was painting The Last Supper, he had an intense and bitter argument with a fellow painter. Da Vinci began to think of a way to get back at this guy. He came up with a devious plan. He decided to paint the face of his enemy as the face of Judas Iscariot so it would be captured for all time, and that is exactly what he did. When people came to look at his work, while it was still in progress, they immediately knew who “Judas” was. Da Vinci got great joy out of portraying this man as Judas Iscariot. But as he continued his work on the painting of Jesus and his disciples, he finally came to the face he had saved for the very end-the face of Jesus. But he drew a mental blank. He had what writers call “writer’s block.” He could not paint a thing. Finally, God convicted him and showed him the trouble was he had painted the face of his enemy as the face of Judas Iscariot. He realized that his hatred and bitterness was keeping him from being able to face the face of Christ. So he went back to the image of Judas and painted some nebulous face. He went to his painter enemy, asked forgiveness, and they were reconciled. Then he went back and could clearly paint the face of Christ and finish one of the world’s greatest portraits.