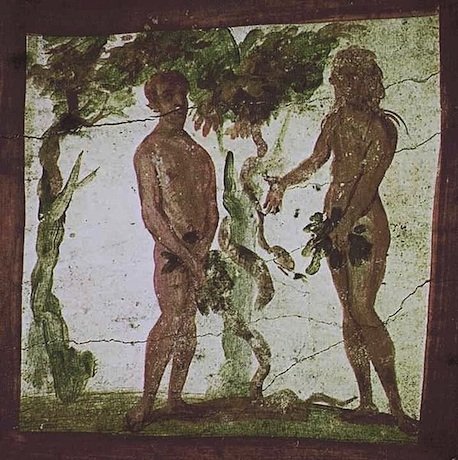 If I invited you to listen closely to today’s scripture readings, then asked you to sum them up in a couple of words, you might answer that these readings are all about sin and temptation.

It is true that the words sin and temptation feature prominently, and no doubt this has prompted some dramatic fire and brimstone sermons over the years But a reality much more powerful than sin and temptation pervades today’s scriptures and it would be a tragic misinterpretation of these readings to miss this bigger point.

We get the picture in the first verses of the first reading:

“The Lord God formed man out of the clay of the ground  and blew into his nostrils the breath of life, and so man became a living being”.

This is a key point: we are creatures, that is, we are created by another. We are not our own creation. We did not make ourselves.

We often hear people say that you can be whoever you choose to be.  This is not true. Given my own physical build I had to accept at an early age that it was not possible for me to be a gymnast or a violinist. While I can play a recognisable tune on a violin, it sounds terrible. And while I can leap over a small creek, I can no longer guarantee making it to the other side.

More fundamentally I am a male who is over six feet tall. My sex and size (ok the increasing weight doesn’t count) were not decided by me. Nor were these characteristics the choice of my parents. In fact they weren’t even determined by anonymous fate. I am a male, born in New Zealand 53 years ago because God, my creator decided that this would be so. Again, I am a created creature, thanks to the divine design and decision of God my creator.

Remember the campaign a few years ago “Girls can do anything”? This is as untrue as the statement “men can do everything.” It is the mature person who can accept the things they cannot do and cannot change. A wise person will know the difference between what they can do and what they cannot do, and will be both honest and open about this.

So the key point, before any comment on temptation and sin, is that we are created by God. Indeed every breath that we are given is a gift of God. In every moment we are receiving the gift of life from the God who is creating us.

To the modern mind this can seem like unfairly limiting impositions, and we can look for ways to escape who we are. However this is overlooking the beauty and wonder of the gift of life that each of us has been given in a remarkable and individually unique way.

Perhaps our modern response is like the one who receives the gift of a woollen jersey lovingly spun, dyed, designed and knitted by a grandmother, then, on opening this gift proceeds to unravel it, re-dye the wool and knit it into a scarf.

After clearly establishing this fundamental point of us being loving created by God, the reading continues with a description of the environment that God originally intended his people to live in:

Then the Lord God planted a garden in Eden, in the east, and placed there the man whom he had formed. Out of the ground the Lord God made various trees grow that were delightful to look at and good for food, with the tree of life in the middle of the garden and the tree of the knowledge of good and evil.

Sounds like paradise? Yes, it was paradise that God created as home for his people. Any of us might dream of such a place in the midst of daily demands and anxieties. But perhaps the most remarkable sign of God’s love for us, is that God gave us freedom.

If we were simply little children, God might have locked us in this wonderful garden with no possibility to even think of other possiblities. This might be the way that parents show their love for their two year old toddler (building fences and locked gates to prevent them from running on the road), but when in a few years the toddler turns 18, the loving parents will show their love for their child by giving them freedom, even allowing their adult child to make wrong choices. If parents, aware that their adult child is going to make bad choices choose to shackle the 18 year old and lock them in the basement, this is not called love. Instead the neighbours who a couple of decades earlier praised the parents for locking up their toddler, would probably call the police.

Well we know the rest of the story. Adam and Eve decided that they wanted more control over their destiny and succumbed to the temptation to live outside the paradise that God had given to them. This vivid story metaphorically tells of the entry of sin into the world. At this point suffering became an earthly reality, not as the intention of God, but rather as the consequence of human grasping at the role of creator.

The second reading provides the context, and the segue into the role of Christ: “Through one man sin entered the world, and through sin, death.” And a couple of verses later the explanation continues: “For if, by the transgression of the one, death came to reign through that one, how much more will those who receive the abundance of grace and of the gift of justification  come to reign in life through the one Jesus Christ”.

This is a significant combination of scripture readings for the first Sunday of Lent. The reality of temptation is with us constantly. This temptation itself is never sinful, unless we are carelessly making ourselves susceptible to the temptation. Our personal battle with temptation is simply evidence that we are living “beyond the garden” in earthly historical reality. The fact that we give into temptation would have fatal consequences were it not for the reality of Christ risen and present among us.

This wonderful fact of Christ with us is the heart of our Lenten journey and our Easter faith. In this earthly Christian reality, our acknowledged sin becomes our capacity for God’s mercy and love.