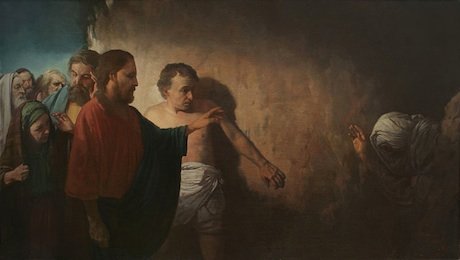 This Sunday, the fifth of Lent, the triptych of key Lenten images concludes with the encounter between Jesus and Lazarus. Last Sunday Jesus gave sight to the man born blind, and the week before Jesus encounters the woman at the well.

These key encounters have been between Jesus and needy individuals. After their encounters both the woman and the man speak about what had happened to them, and many others come to believe because of their witness. It is important to note that they did not set up committees to plan their evangelization effort. Nor did they need to invite overseas speakers to tell them what had happened to them and the consequences of these happenings. They were simply overwhelmed by their encounter with Jesus and their new life was highly contagious. They had become attractive witnesses to Jesus because they were no longer simply a woman at a well or a man born blind, but were people in love with Jesus. Now they were in relationship with the one whom everyone (whether they knew it or not) sought, and this gave them a new identity not based on their struggle and needs but on the one who had saved them. They now had a new personal identity as disciples of Jesus.

Too often these events are reduced in meaning in a misguided effort to make the stories more humanly realistic and believable.  Jesus’ encounter with the woman or the blind man is read as little more than needy people meeting with a helpful hero. The message might be reduced to an encouragement to reach out to strangers or to help us to see with broader vision.

The gospel readings of the past two Sunday lead up to today’s great account of Jesus raising Lazarus from death. I once heard a preacher comment that ‘in the same way that Jesus raised Lazarus from death, so too after we die Jesus will raise us from death too.’  But in fact none of us will be raised from death as Lazarus was – we will instead be raised as Jesus is. Pope Benedict clarifies this:

“Now it must be acknowledged that if in Jesus’ Resurrection we were dealing simply with the miracle of a resuscitated corpse, it would ultimately be of no concern to us. For it would be no more important than the resuscitation of a clinically dead person through the art of doctors. For the world as such and for our human existence, nothing would have changed. The miracle of a resuscitated corpse would indicate that Jesus’ Resurrection was equivalent to the raising of the son of the widow of Nain (Luke 7:11-17), the daughter of Jairus (Mark 5:22-24, 35-43 and parallel passages), and Lazarus (John 11:1-44). After a more or less short period, these individuals returned to their former lives, and then at a later point they died definitively.

The New Testament testimonies leave us in no doubt that what happened in the “Resurrection of the Son of Man” was utterly different. Jesus’ Resurrection was about breaking out into an entirely new form of life, into a life that is no longer subject to the law of dying and becoming, but lies beyond it – a life that opens up a new dimension of human existence. Therefore the Resurrection of Jesus is not an isolated event that we could set aside as something limited to the past, but it constitutes an “evolutionary leap” (to draw an analogy, albeit one that is easily misunderstood). In Jesus’ Resurrection a new possibility of human existence is attained that affects everyone and that opens up a new future, a new kind of future, for mankind”.    Jesus of Nazareth Vol III  pp.243-244

Most people don’t want to die. Now that Lazarus had been resuscitated he would have had to go through death all over again! I feel sorry for him! It is helpful to not see Lazarus as a central player in the event, rather as little more than the tool used by Jesus to make a point. Lazarus doesn’t say a word.

The key protagonist in this account is not Lazarus, but Jesus with Martha and Mary. Take a moment to read the gospel at this link focussing on the conversations between Jesus and these two faith-filled women. Savouring their response to Jesus and their words will give a much deeper appreciation of the power of living in relationship with Jesus.

The encounter  between Jesus, Lazarus, Martha and Mary, the woman at the well, and the blind man, happens in a moment of time. However the real grace is the capacity to understand the significance of the event by living every future moment in this divine relationship of love.