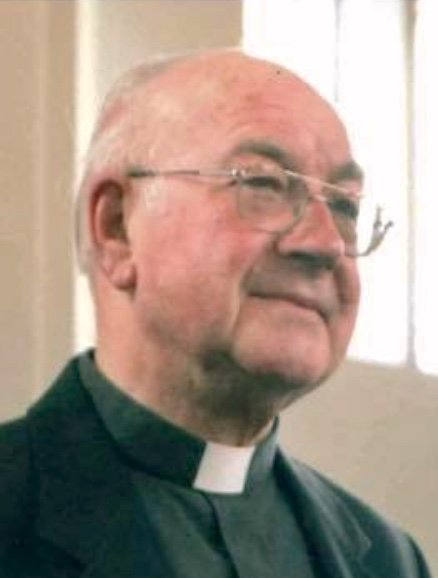 I suppose there are are two extremes for a funeral homily. Either the homilist can speak only about the life of the person who has died,  celebrating the life and saying good-bye, or focus on the life of God with hardly a mention of the one who has died. Both extremes miss the point. It is sadly rare for a funeral homily to weave together the human characteristics and personality with the divine reality of God-with-us.

On Wednesday of this week Bishop Steve Lowe of Hamilton preached at the funeral Mass of Monsignor Jim Harrington at St. Mary’s pro-Cathedral in Christchurch. His homily was a powerful tribute to the action of God in the personality, characteristics and priesthood of Jim Harrington. Of course Steve had great material to work with since for Jim there was no distinction between the man and the priest.

We are grateful to Bishop Steve for sharing this homily below with Food For Faith readers.

Who can this be? Even the wind and the sea obey him.

This is the question from the Gospel reading. Both this reading and the reading from Hebrews that spoke of our heavenly homeland, the eternal city founded, designed and built by God were the readings on Saturday morning, the day God called James Morris Harrington from this life to himself.

Who can this be? Jeremiah must have wondered the same thing as he heard God say to him, Before I formed you in the womb I knew you, consecrated you and appointed you.

Who can this be? Abraham and Sarah must have pondered this as they discerned the mysterious call to them to journey to an unknown Promised Land.

Who can this be? This is surely the defining question of the life and death of Jim Harrington and of why we are here today. For the life and death of Monsignor James Harrington is inextricably interwoven with Him who knew him before he formed him in his mother’s womb, with Him who consecrated and appointed him as his priest in and for his Church, and in Him who died and rose again for us all.

Jim Harrington was born in 1932, the eldest of Stan and Gerty Harrington’s four children. The vocation for this artist priest began in the Harrington home, in his schooling with the Mission Sisters and with the Marist brothers, in the Parish of St Peter’s Beckenham, under the influence of Monsignor Kennedy and within the city of Christchurch that he loved so much.

Jim was a very private man and often parishioners knew little of him or of his childhood but at his 40th anniversary celebrations, Sally roasted her brother with stories of his youth… of the bike he won in an art competition only to have it stolen. And the stoic response was – the Lord giveth and the Lord taketh, Blessed be the name of the Lord… And of how he would want to play priest with you his sisters and how Jim would use a Superman cape his mother had made for him for a cope… He had sliced apples for hosts and his sister became the first altar girl to hold his cope… And then after his Mass the cope would again turn into Superman’s cape as the future priest turned back into their brother.

So from earliest days the call was there and tomorrow, the feast of the Presentation marks the 70th anniversary of his entering Holy Name Seminary in Riccarton Road as a first day student. He did his high school there and studied Latin and philosophy before studying theology at Holy Cross College at Mosgiel. He was ordained as a priest of the Diocese of Christchurch at St Peter’s Beckenham on the 14th of July 1957… one of seven ordained that year for this Diocese.

At his priestly ordination, as he lay prostrate on the floor, the congregation sang the Litany of Saints, praying “bless this chosen one, bless this chosen one and make him holy, bless this chosen one and set him apart for sacred duties.” And over the next almost 60 years he has been a faithful minister of these sacred duties in  Hokitika, Rangiora, Mairehau and Sockburn as an assistant priest, Runanga as Administrator, Cheviot as Parish Priest, as the Administrator of his most loved Cathedral, and Parish Priest of Greymouth, Mairehau and the Mid-Canterbury parishes before his retirement.

It was in 1994 that I really got to know Monsignoer Jim, and Bishop Basil, I would like to thank you for appointing me to be with him at Our Lady of Fatima Parish. Now Jim wasn’t what you would call a huggy Monsignor so when I arrived to start my pastoral year I was greeted with – Ah, Mrs McCormack’s grandson. I knew your parents before you did and in more recent times I have baptised one of your nephews in Greymouth… He was right on all counts… Jim was a shy man, and knowing people’s genealogy was one of the ways he showed he cared. And so started two great years for me as a seminarian, deacon and priest and of a friendship that has grown over the years

In the lounge in the Mairehau presbytery there were four paintings that give an insight into him. The first was a caricature that he, the artist, drew of Monsignor James Aloysius Kennedy, his parish priest, his mentor, his friend. It’s a picture of a man he loved, who shaped him. But in the same way he loved and honoured all the men and women of faith, the Abrahams and Sarahs of this Diocese. He knew and kept their history and stories. Many of us have been captivated over the years as the faith of forebears have been recounted in the talks that he gave and articles he wrote.

A second picture was of himself and Fr Mark Mosebergen by the spiral staircase in the Cathedral. Jim loved being a priest of the Diocese of Christchurch and he was a friend to all the priests and a mentor or source of wisdom to many. As newly ordained priests the then Fr Charles Drennan and myself would have sat in the lounge with him. “Have a drink or something…” he would say and we would share what we felt was wrong with the Church… He would laugh and say, “Oh, we were all young once.” And then he would ask if we had thought of this or that. He never condemned but encouraged and opened. Always encouraging, always enjoying the company of his brother priests. But this picture also looks beyond to the care of his people. The priest is called to be a sign and instrument of God’s mercy and in Mons Harrington, who knew his own need for mercy, they found a gentle dispenser of God’s merciful love as a confessor. One of the children who was in Mairehau when I was there wrote this on my Facebook page of Monsignor… “A great person and great memories… A man who watched me through all my junior years of schooling and brought me through three sacraments of life and was always there.” The mystery of the priest who is called to be the living and transparent image of Christ among his people.

A third picture was of the Cathedral of the Blessed Sacrament. He loved the Cathedral. His parents were married there and he became a son of God there through the waters of baptism and so began his life of faith. He was entrusted with the task of reordering the Cathedral in the light of the liturgical changes. He worked tirelessly to preserve its heritage and to bring others to appreciate what a treasure we had in it. But this picture of our mother church was also a symbol of his love for our mother the Church and the Church in turn honoured him. He was made a Prelate of Honour, a Monsignor, by Pope Paul VI in 1977 after reordering the Cathedral and a Protonotary Apostolic in 2005 by Pope Benedict XVI for all the many tasks he did for the life of the Diocese. One of the quotes he often used was “We have here no lasting city” from the letter to the Hebrews. The devastation the earthquakes brought to the city and in particular to the Cathedral were a great sadness to him.

The final picture was a print of Michelangelo’s sketches of what was to become his Last Supper. I always loved this print… It spoke to me of the mystery that we must enter with the eyes of faith to perceive the reality. His homilies were always carefully crafted… he was a wordsmith and in particular his homilies for special occasions always captured the moment. He also had a gift of being able to preach to children as he wove for them the story. For Jim to celebrate the Eucharist was art… it was to be done beautifully, prayerfully so that we could enter the mystery. So liturgy always had to be done well. I was given the task of preparing the Christmas Carol service leading into Midnight Mass and I thought it went very well and people seemed to enjoy it… “Oh, but you started six minutes late”, he said! I suggested to him that Israel had to wait for centuries for the coming of the Messiah so six minutes wasn’t too bad! And then two years ago, amazingly in ill health he made it to Hamilton for my ordination as bishop – After the Mass I asked what did you think – “Oh, you had your crozier around the wrong way!”

Another of Jim’s sayings was, “these bones are not long for Bromley” speaking of the day when his body would be laid to rest at the Bromley Cemetery alongside his brother priests. And today is that day when we take his body to Bromley and entrust his soul to the mercy of God. Nearly sixty years ago he lay prostrate as the people gathered around him prayed for him as he was ordained a priest. Today, he lies here in death, and again we gather around him pray for him, praying he may be shown mercy, that he may be commended for his faithful service and and that he see the fulfilment of his faith in his heavenly homeland.

Jim you have lived your life in the love and knowledge of the one who formed you and consecrated you. May he now take you to himself. May you rest in his peace. Amen. So be it.