There are three chapters of Matthew’s Gospel given to a significant portion of Jesus teaching. We know these chapters (5-7) as the “Sermon on the Mount“. This teaching of Jesus begins with the beatitudes and continues through forgiveness and authentic practices of faith.
As I noted in the last blog entry, the crowds would have been astounded at the newness of Jesus’ teaching. Until Jesus, almost every leader had incited physical violence as the way to bring peace. Instead of proclaiming the powerful, the mighty, the successful, as ‘blessed’, Jesus promises ‘blessedness’ and ‘happiness’ to those who are meek, humble, poor and persecuted.
I am happy to hear this.  Being powerful, proud, strong and successful takes a lot of work!  It is exhausting.  (others tell me this of course!).  Jesus offers us a more effective and relaxing method to life.  Just relax and trust God for everything.
Our visit was to the probable site of this teaching of Jesus: the ‘Sermon on the Mount’. The hills above the Sea of Galilee even form a natural ampitheater. It is not difficult to imagine Jesus teaching and the curious crowds gathering to be nourished.

We celebrated Mass together at a small outdoor chapel overlooking the hills and the lake. As always we began the Mass by remembering those we pray for, you the pilgrims who continue to journey with God from home, and the many people whose prayers and intentions we carry.
A regular pattern now is that each day we take half an hour (more if possible) for our own personal prayer in stillness and silence. These sacred moments to savour the beauty of God with us in the Mass have become for us a highlight of each day.
Every day of our pilgrimage we have prayed for peace. We do this by singing the ancient hymn “Dona Nobis Pacem”.  We have been practicing and our singing is improving with each day.  When we sang this at the end of Mass a couple of days ago, some other tourists stopped to listen, then asked our guide Adrian where the visiting choir was from!
Mosaics in Zippori

One of the remarkable things about archeological discoveries in Israel (one of the oldest inhabited parts of the world) is that almost all excavation is relatively recent.


The excavations at Zippori began only a few decades ago. Zippori is only a few kilometres from Nazareth and here in the period of Roman rule of Palestine (63BC – 313 AD) a city grew.
Because this city was so close to Nazareth, and a place where much building was happening, it is certain that Joseph and Jesus as carpenters / stonemasons would have worked here.  The tradition supports this.
The mosaics we visited formed from coloured stone told the story of Roman ‘gods’ and their encounters with humans. These mosaics formed the floors of some houses. Later, after Christianity became the religion of the empire (c325), the new Christians replaced their now-inappropriate ‘pagan carpets’ with new layers of mosaic flooring. Excavations here in the last thirty years have revealed these layers of civilization and belief. 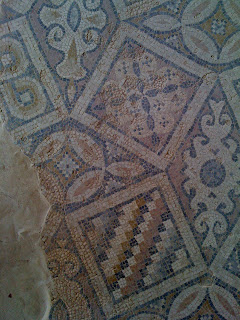