During the celebration of Mass this afternoon I was aware that there were twice as many priests in the chapel as others. There were more than twenty priests. Most of them were in their 20’s and 30’s. I think there were only three older than me!
In many parts of the western world there is still a pervading remnant of a 1970’s – 1980’s spirit of negativity about the Catholic Church, and a sense that the Church was in decline.  This decline is not the present reality of the church.
In the last two decades, I have noticed a growing number of people appreciating that the Catholic Church offers something different from the western smorgasboard of secular and religious options. And today, more than ever in recent history, discerning people are looking for a life that will lead them to intimacy with God. This is the purpose of the Catholic Church.

I know that most NZ’ers would be surprised to see as many young priests as I celebrated Mass with today. That’s why I’m posting this encouragement.

It is significant to note that ten years ago there was one seminarian studying for the Diocese of Christchurch. This year there are nine.

I was interested to read the cover article of the NZ Listener magazine a couple of months ago (April 6-12). The cover advertised the article: “Why the scandal-ridden Catholic Church is growing fast in secular NZ.” 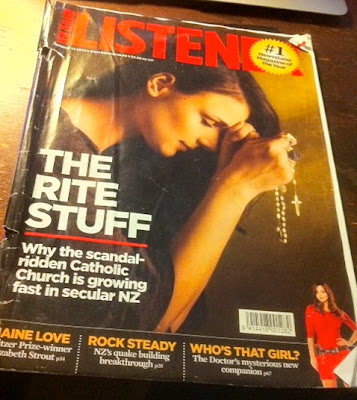 It is true that the Church has been through a time of purification. Let us hope that the Church continues to be purified of all that distracts us from the heart of our mission. But the Listener article notes a positive spirit of healthy and energy among Catholics:

The three page feature then concludes stating that all those who were interviewed for the article were optimistic, then finished with a comment from Joy Cowley: 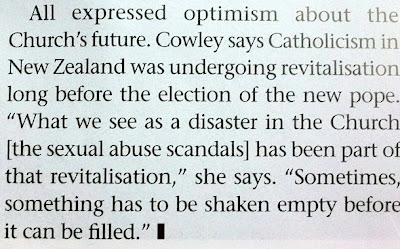 So while we don’t put too much weight on media comments, let those of us who are committed to living fully as Catholics be encouraged by a positive Listener article, and the couple of dozen young priests who prayed with me at Mass this afternoon.