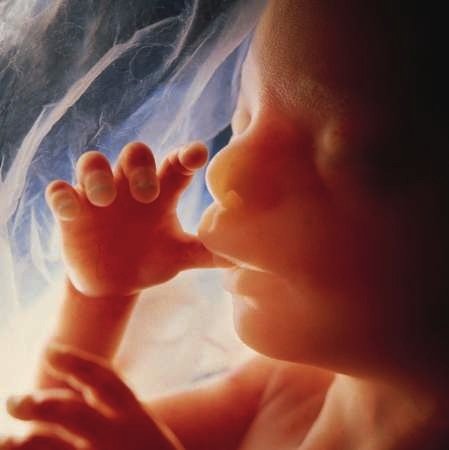 in all forms, and at every stage

One of the biggest news stories to come out of last week’s Christchurch A&P show was the outrage that some people felt at the presence of the “life” stand at the festival.

This morning’s news bulletins reported that some parents were especially offended that small foetus dolls were distributed to help children to appreciate stages of the pre-birth life of a human person.

Contrary to the comment of one complainant, the stall was not staffed by conservative old men, but by sincere and balanced young people who facebooked this flyer to provide a few facts about their presence: 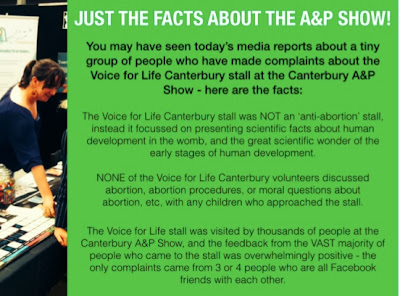 One of the team responded to a critic saying:

“Your girls and boys held the models and marvelled at how small they once were. Their faces were open and their responses beautiful. I, as a parent, was conscious of their age and kept the conversation purely about the beauty of life. Adults or teenagers who approached us with direct questions about abortion were respectively answered.”

One parent was particularly enraged because after her child had seen the foetus doll she had to speak to this ten year old child “about the facts of life and abortion”. I hope she managed to do this without conveying her own fears.

During the day, since reading the news report, I wondered how a parent might respond if any one of a variety of other dolls was given to their child at an A&P show. A quick google search offers a selection of easily available dolls including Barbie & Ken dolls, down’s syndrome dolls, old people dolls, foetus dolls, nun dolls, soldier dolls, Dalai Llama and Buddhist dolls  and Halloween dolls.

I accept that some people might be shocked and even offended at their child coming home with a foetus doll. But perhaps the child’s curiosity about the new gift provides a rare opportunity for a parent to speak deeply with their child about the beauty of human life at every stage of development from conception to natural death. I would expect that such heart-of-life chats would be among the very first conversations that a parent has with a toddler. I would also hope that a child who brought a down’s syndrome or elderly person doll home, would find their parents eager to have a ‘love-and-respect-for-life-in-every-form’ chat. A parent will find clear direction from Pope Francis:

“Things have a price and can be for sale, but people have a dignity that is priceless and worth far more than things,” he added. September 2013

Then there is this powerful image that speaks volumes about the beauty of the person who is severely disabled: 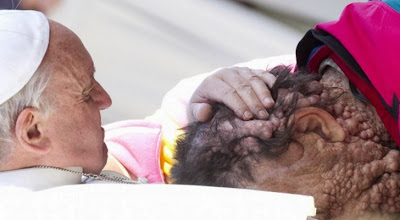 As I write this I am moved, and I ponder anew the diversity, beauty and gift of every human life. But at the same time I am shaken, outraged even, knowing that if Ken and Barbie dolls had been freely distributed at the show, there would be no outrage and no complaints. Yet these fake icons have idolised an image that has become the ideal for too many of us. Just think of the marketing, advertising and business devoted to the “body-beautiful”. TV schedules are saturated with weight-loss, cosmetic and fitness programmes and advertising. How many people are given to despair when they fail to achieve such an unrealistic and artificial look.

And what about the soldier dolls, khaki automatons wielding weapons: these “toys” are available in any toy store, and too many parents buy these as gifts for their ten year old children.

The pro-life stall holders will naturally evaluate their presence, comments and actions at the show. The response of the media and radio talk-back callers gives a fairly representative cross-section of the opinions in our society. The sense I have is that while we know New Zealand is no longer a predominantly Christian society, neither can we call ourselves truly “humanist” if we reject opportunities to teach children of the value and worth of human life in all its diversity, and at every stage of the earthly human journey from conception to natural death.