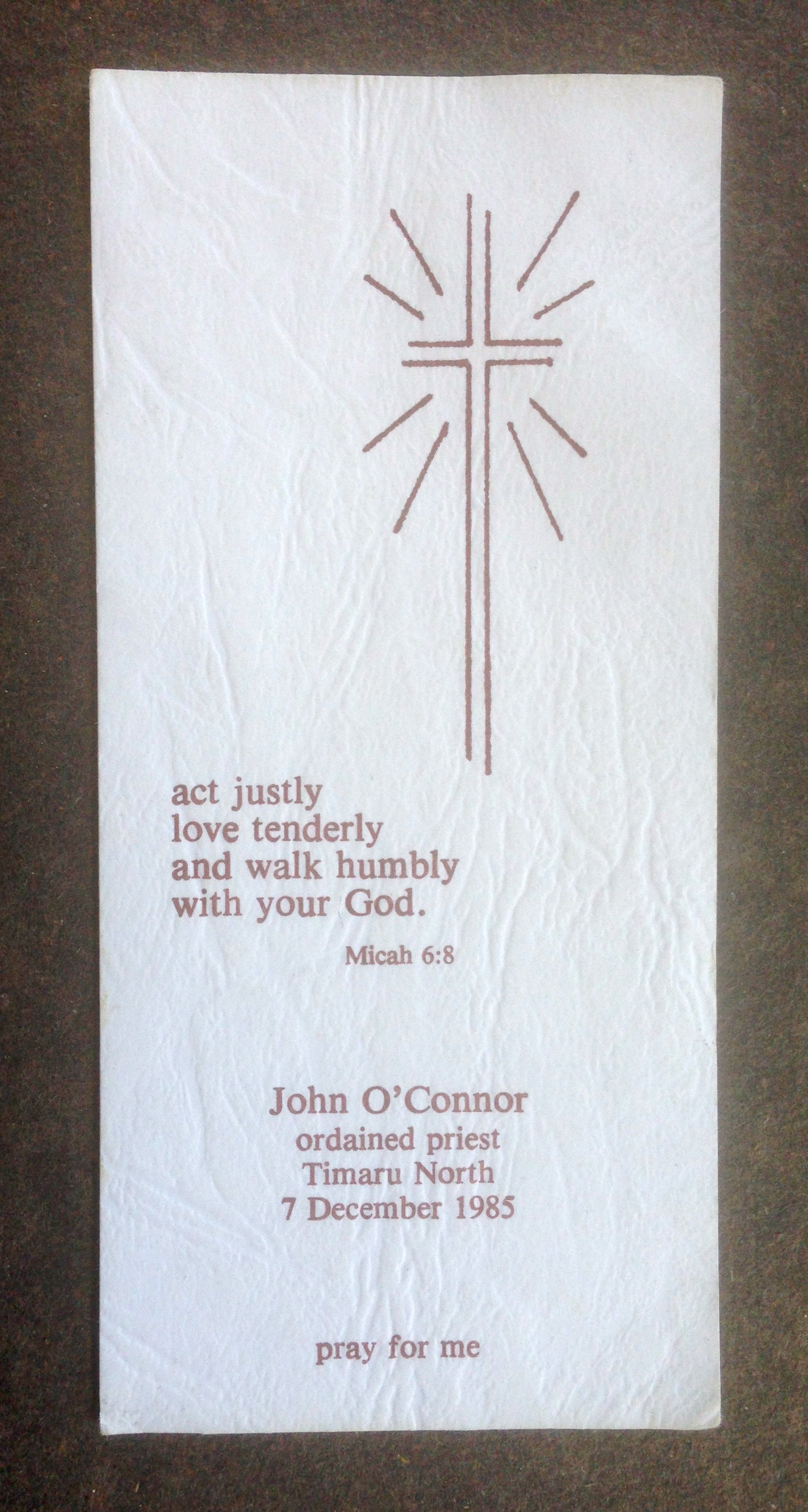 I’m not going to miss the opportunity to remind blog readers to pray for me. Twenty-Eight years ago today I was ordained a priest, by Bishop Denis Hanrahan, in the Church of St. Thomas the Apostle, Timaru.
Throughout these years I have kept on my desk the image of my ordination card. As these cards go, this one is pretty simple in keeping with the style of the time. But there are five very significant things on the card. Two of these were happily decided for me, but three others were the fruit of many months of reflection.
The date is significant. Bishop Denis Hanrahan wrote to me in mid-September 1985 informing me that he would ordain me to the priesthood on Saturday 7 December 1985.
It seems superfluous to say that my name on the card is significant. But my Christian names, John Cornelius, were given to me and became my names not on the day of my birth, but at my baptism ten days later. Until my baptism I was simply “Baby O’Connor” and people would ask my parents ‘how’s “the baby” doing?’  After my baptism I had a name and in this baptismal naming my personal identity was both recognised and sealed.
Most ordination cards have a quotation from scripture. I have several favourite verses that encourage and inspire me. But this verse from the Old Testament prophet Micah would not let me go. It is a challenge to seek only to walk only with God. There are so many other things that seem important, but this is paramount – there is only one thing that matters, and everything else falls into place for the one who walks with God. My progress in living this exhortation is slow, so the card will need to stay on my desk reminding me to “act justly, love tenderly, and to walk humbly with God.”
The image on the card is simple but very significant for me. The eighties were a time of focussing on the resurrection of Jesus since the feeling was that we had had enough of death.  But one is meaningless without the other. Death is an inescapable part of daily earthly life, and it is the resurrection of Jesus that provides an answer to every deathly reality. I remember well the afternoon when I went to my seminary room with this clarity, took out a pen and a ruler, and made this simple sketch which was then copied onto the card.
The fifth significant point is the three-word request at the bottom of the card: “pray for me”.  Many other ordinands cards of the time use the wording “pray withme” or “please pray for me”.  I liked those invitations too, but I felt that this was no time for an appearance of inclusiveness or polite and gentle request. I knew then that I needed prayer, and I know now even more than then that I need the prayer of anyone and everyone who will pray for me.
Just after the ordination Mass a couple of women from a Southland Catholic Women’s League came up to me and said, “we were given your name when you entered the seminary. We have prayed for you since then, and now we will keep on praying for you”. Thank you Tui and your friends.
So blog readers, pray for me.