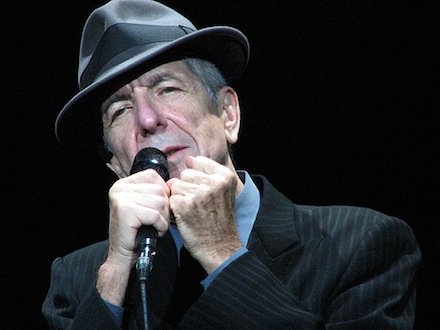 I have several friends for whom Christmas has come early with the Leonard Cohen concert in Christchurch on Saturday night. I too am a bit of a Cohen fan, and yesterday as I drove between the Hurunui Masses I savoured again his Live in London album.
Cohen is well known for surviving the 1960’s and ’70’s, and now lives well into his 70’s (he’s 79) encouraging others to gracefully do the same. His gentle warm manner, and easy conversation with diverse audiences at sell-out concerts. are trademark Cohen characteristics. At the Live in London concert he introduced “Ain’t No Cure For Love” reflectively recalling his previous London appearance:

“It was about 14 or 15 years ago. I was 60 years old, just a kid with a crazy dream. Since then I’ve taken a lot of Prozac, Paxil, Welbutrin, Effexor, Ritalin, Focalin. I’ve also studied deeply in the philosophies and religions, but cheerfulness kept breaking through.”

The “cheerfulness keeps breaking through” is a Ben Jonson quotation and every time I hear it I’m reminded of how most people see religion as a killjoy occupation. It is a tragic commentary on the efforts of Christians that our religion is so often perceived as unattractive and unnecessary for the one who seeks to live fully.
Earlier this year Pope Francis spoke to catechists saying”

“The Church does not grow by proselytizing; she grows by attracting others.” And what attracts is our witness. Being a catechist means witnessing to the faith, being consistent in our personal life. This is not easy! We help, we lead others to Jesus with our words and our lives, with our witness. I like to recall what Saint Francis of Assisi used to say to his friars: “Preach the Gospel at all times; if necessary, use words.” Words come . . . but witness comes first: people should see the Gospel, read the Gospel, in our lives.” Address to Catechists, April 27, 2013

I think Pope Francis and Leonard Cohen in conversation would be a not-to-miss concert. What do you think?