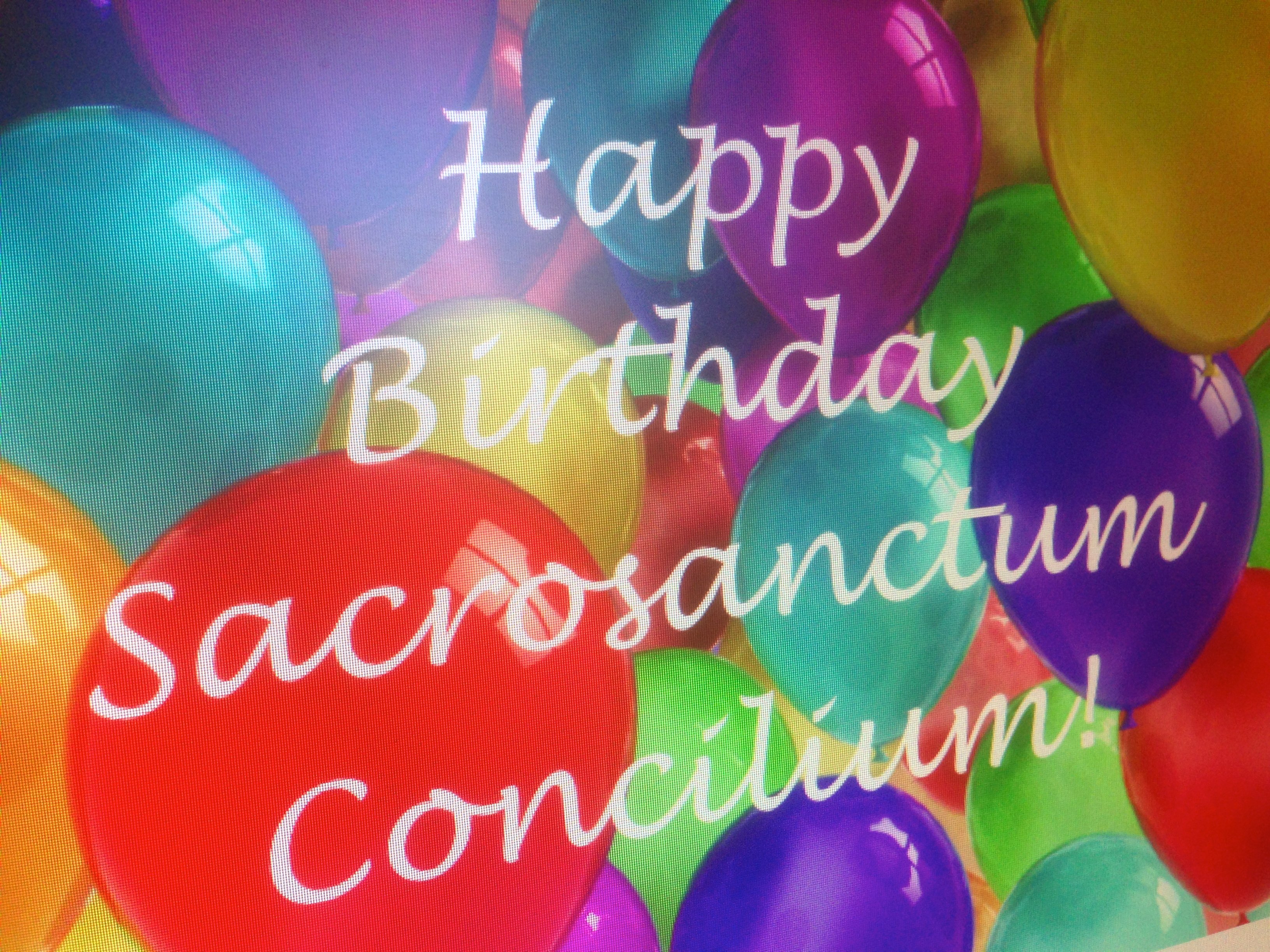 A friend has just posted a “Happy Birthday Sacrosanctum Concilium” message on Facebook. Fifty years ago this week the Second Vatican Council’s Constitution on the Sacred Liturgy, (the first conciliar constitution and one of the first two documents along with the Decree on Social Communication) was promulgated.

Over the past twelve months of the Year of Faith, I have presented sessions on the Liturgy Constitution throughout the diocese of Christchurch. At each session parishioners of pastoral areas, school teachers, sisters and priests have gathered to discover more about the liturgical gifts and guidance of the Second Vatican Council.

I began each of these dozen sessions by asking some general questions. First question: list some of the teachings or changes brought about by the Second Vatican Council. At no session have more than three or four answers been offered

I then asked how many documents were promulgated at the Council. Every group looked a bit vague and guesses four, six, eight. There were sixteen.

Then I ask people to name some of the titles or themes of these sixteen documents. Apart from the four Constitutions, (Liturgy, Church, Revelation & Church in the Modern World), none of the groups have come up with more than one or two of the other Conciliar documents.

The vast majority of Catholics today view the Second Vatican Council and it’s teachings with pride and affection, and in most parishes and dioceses there is a deep fear of anything that might as much as hint at turning back on the teachings of Vatican II.

Which takes me back to one of the questions I asked the groups: “list some of the teachings or changes brought about by the Second Vatican Council”.  Every group began their responses with the same two points: Mass in English, and priest facing the people during Mass.

use of the vernacular in liturgy

You might be surprised to learn, as the people at each session were, that the while the Council did debate and discuss at length the language of the liturgy, this did not result in the requirement that the local (vernacular) language would be used in every place throughout every celebration of every Mass. Each paragraph of the Liturgy Constitution is driven by a desire to reawaken all people to a “full, conscious and active participation” in the Liturgy of the Church, and the bishops clearly accepted that this would be helped considerably by  a greater use of the local language:

“In Masses which are celebrated with the people, a suitable place may be allotted to their mother tongue. This is to apply in the first place to the readings and “the common prayer,” but also, as local conditions may warrant, to those parts which pertain to the people, according to the norm laid down in Art. 36 of this Constitution.

Nevertheless steps should be taken so that the faithful may also be able to say or to sing together in Latin those parts of the Ordinary of the Mass which pertain to them.  SC par.54

The bishops who voted with an overwhelming majority (2147 to 4) were not voting to reject and replace the Latin language in liturgy. Nor were they advocating a form of liturgy that focussed more on the people gathered than on the One who had gathered them. In their positive vote, the bishops were desiring a liturgy that was less preoccupied with minute details of arcane rites and rubrics, and more driven by the human desire for unity with the One who gathers us, and with whom our hearts seek intimate and active participation.

It is a mature Catholic parish today that uses a variety of local languages and music alongside Latin in each Sunday celebration of the Mass. I know of one parish in New Zealand which every Sunday prays in Latin (Sanctus, Agnus Dei), Greek (the most ancient language of the liturgy for the Kyrie), contemporary composer for one hymn (often a Gathering hymn), one hymn that would have been familiar to our grandparents (usually Thanksgiving after Communion), and chanted psalms (the Propers) following the first reading, and at the Offertory and Communion processions. Such a parish has truly understood something of the mind and intention of the Council

If your seven year old nephew were to stand at a family party and sing in the Gaelic language because he had learned that this was the tongue of his great-great grandmother, would you encourage him to stop because Gaelic is an old and now “dead” language, and we live in progressive twenty-first century New Zealand? You would more likely be moved to tears at the beauty of the memory, and ask him to sing at every family gathering.

The Church is a family united by bonds of blood and love rather than a company created to meet a particular need and then dissolved when that need passes. A boy singing in a foreign language at a social club might be entertaining, but in a family such a powerful link with the lives and faith of ancestors touches us deeply, and strengthens us to move forward.

It is worth noting that when Gregorian Chant disappeared from our local Catholic liturgies, the sales of recordings of this ancient form of worship skyrocketed. Perhaps there is something about Gregorian chant that feeds a hunger of the soul?

The second response in the Year of Faith groups was that the Council instructed the priest to turn to face the people for the Mass. In fact the direction the priest was to face during Mass is not mentioned in any Council Document. Pope Benedict helped us to understand this: the direction of the priest during Mass had come to be understood as “back to people” rather than towards Christ in the cosmic reminder of the rising of the sun in the east (ad orientem) and present in the tabernacle.

In one of his earlier books (I think it was “The Feast of Faith“) Benedict comments that with the priest facing the people, there is the risk that the priest becomes unintentionally and unhelpfully central in the Mass. Prior to the change, an onlooker would notice priest and people facing the same direction during the Mass, now the circle can appear too closed as priest and people seem to be more focussed on each other.

Pope Benedict went on to comment that this certainly does not mean we should change back, but rather that we must heed the call of the Council to make Christ the centre of every Liturgy, and that our vocal prayer and ritual movement in the Mass must serve to lead all parishioners to a more full, conscious and active participation not primarily with the priest or with the community, but with Christ.

Pope Benedict used a crucifix with candles to help him and the large crowds focus during Mass on Christ. Pope Francis uses his shift in manner: outside of Mass he is jovial and engaging, during Mass he is solemn and visibly focussed on a greater reality.

beyond the Year of Faith

A few weeks ago as we neared the end of the Year of Faith, I asked a group of people at a day-retreat the same questions that I had asked of other groups. Pope Benedict had initiated the focus-on-faith year suggesting that:

“This will be a good opportunity to usher the whole Church into a time of particular reflection and rediscovery of the faith. (par 4)

5. I believe that timing the launch of the Year of Faith to coincide with the fiftieth anniversary of the opening of the Second Vatican Council will provide a good opportunity to help people understand that the texts bequeathed by the Council Fathers, “have lost nothing of their value or brilliance. They need to be read correctly, to be widely known and taken to heart as important and normative texts of the Magisterium, within the Church’s Tradition. I feel in duty bound to point to the Council as the great grace bestowed on the Church in the twentieth century: there we find a sure compass by which to take our bearings in the century now beginning.”           Porta Fidei

However the responses of the retreat group were as uninformed as those of the earlier groups. Even after the faith-focus of the past year, we are no better able to use the Council as a “sure compass” in our lives of faith.

But perhaps we still have a chance?  This week I spent a couple of hours with parishioners of a city parish who wanted to use these Advent days as an opportunity to prepare for Christmas. On Thursday night I led a session for them entitled “Living Faith with Pope Francis.” The response was overwhelmingly enthusiastic with people who were drawn because of their attraction to what they see and hear in our new pope over the past nine months, and now have collated, published and therefore verified in his Apostolic Exhortation, “The Joy of the Gospel”.

Pope Francis gives us a key to effective evangelization. Our goal is not to twist the arms of believers to engage their intellects with their lives of faith. Our missionary task is likewise not to manipulate minds so that people come to Church, or keep the commandments. As the pope proclaims “it is not by proselytizing that the Church grows, but “by attraction,”(par.14) and every aspect of our reformed lives flows from this encounter, “for if we have received the love which restores meaning to our lives, how can we fail to share that love with others”. (par.8)

This leads us to the point that is both the “summit” to which all authentic human life and all worship of God (liturgy) is oriented, and the “source” from which all authentic life and liturgy flows. (SC 10)  Pope Francis in his exhortation delights in quoting Pope Benedict when he writes:

“I never tire of repeating those words of Benedict XVI which take us to the very heart of the Gospel: “Being a Christian is not the result of an ethical choice or a lofty idea, but the encounter with an event, a person, which gives life a new horizon and a decisive direction”. (Pope Francis in “The Joy of the Gospel par.7, quoting Pope Benedict in “God is Love”, Dec. 2005).

Pope Benedict reminded us powerfully that because the Liturgy of the Church, especially the Celebration of the Eucharist, is both the source and summit of the life of the Christian, if we get the focus and celebration of the Mass right in our parishes and dioceses, then many other things will simply fall into place.

Pope Francis is reminding us that the Mass cannot be separated from the “joys and the hopes, the griefs and the anxieties” of the people who come to Mass, and also those who, for whatever reason, do not see the Mass as relevant or necessary.

The Season of Advent gives us an opportunity for a new beginning, at the start of a new Church year, and an invitation to live beyond the Year of Faith as faith-full people. Let’s celebrate this fiftieth anniversary of the Church’s Constitution on the Liturgy as a golden opportunity to receive anew the gift that is the Liturgy of the Church.