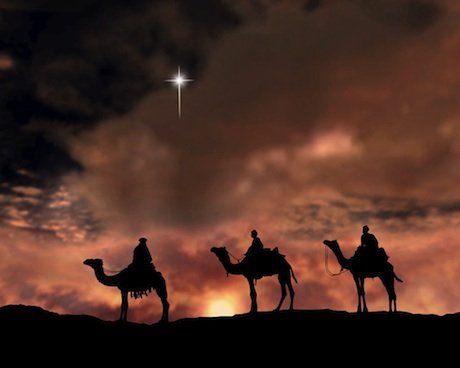 One of the disadvantages of living just west of the international dateline is that priests’ and popes’ (I’m enjoying shifting that apostrophe while we can) blogs don’t carry their Sunday homilies until after I have finished most of the Sunday Masses, so I don’t get to copy their ideas, and instead have to do my own homily preparation work.

I will be interested this year to see what part of this weekend’s Epiphany feast Pope Francis chooses to emphasise in his homily on Monday. I had a wedding in Hanmer Springs yesterday afternoon and on the 1.5 hour drive home I pondered Epiphany homily possibilities and even had a thought about what Pope Francis might preach.

He could use this first major homily of the new year to re-present his nine months of teaching as new year’s resolutions. But more likely, given his common themes over the past few months, I think he might emphasise the three Magi as boundary crossers, adventurers who were not afraid to break through geographical and cultural borders going to any and every length in search of the one for whom their hearts longed. Perhaps they did not smell like their camels, but clearly they had no problem with leaving the comfort of their observatories and homeland securities, getting their hands dirty and their bodies wearied in this ultimate task of following their heart’s deepest desire.

“men with a restless heart…They were filled with expectation, not satisfied with their secure income and their respectable place in society. They were looking for something greater. They were no doubt learned men, quite knowledgeable about the heavens and probably possessed of a fine philosophical formation. But they desired more than simply knowledge about things. They wanted above all else to know what is essential. They wanted to know how we succeed in being human. And therefore they wanted to know if God exists, and where and how he exists. Whether he is concerned about us and how we can encounter him. Nor did they want just to know. They wanted to understand the truth about ourselves and about God and the world. Their outward pilgrimage was an expression of their inward journey, the inner pilgrimage of their hearts. They were men who sought God and were ultimately on the way towards him. They were seekers after God.   Pope Benedict, Epiphany, 6 January 2013

As Benedict suggests the starting point for their journey was that they wanted to know how to succeed in being human. It is in this ambition that all healthy humans are united. We all want to be successfully ourselves, but we are also a bit uncertain about how to do this. Too often we think that financial security and societal respectability will bring the success and satisfaction that we seek. But when we get the new job, or even the dream relationship, we realise that there is still something that is not “at ease” in us.

Ronald Rolheiser wrote a great little book a few years ago entitled “The Holy Longing” which opens by naming “desire” as “our fundamental dis-ease.” He writes:

“It is no easy task to walk this earth and find peace. Inside of us, it would seem, something is at odds with the very rhythm of things and we are forever restless, dissatisfied, frustrated, and aching. We are so overcharged with desire that it is hard to come to simple rest. Desire is always stronger than satisfaction.

Put more simply, there is within us a fundamental dis-ease, an unquenchable fire that renders us incapable, in this life, of ever coming to full peace. This desire lies at the center of our lives, in the marrow of our bones, and in the deep recesses of the soul. We are not easeful human beings who occasionally get restless, serene persons who once in a while are obsessed by desire. The reverse is true. We are driven persons, forever obsessed, congenitally dis-eased, living lives, as Thoreau once suggested, of quiet desperation, only occasionally experiencing peace. Desire is the straw that stirs the drink…

… Whatever the expression, everyone is ultimately talking about the same thing–an unquenchable fire, a restlessness, a longing, a disquiet, a hunger, a loneliness, a gnawing nostalgia, a wildness that cannot be tamed, a congenital all-embracing ache that lies at the center of human experience and is the ultimate force that drives everything else. This dis-ease is universal. Desire gives no exemptions.   “The Holy Longing” Ronald Rolheiser, opening chapter.

The suggestion here is that if you have managed to satisfy all the longings of your heart, then you have a serious and even fatal problem, since the one who is without desire has ceased to live. The Magi of today’s feast are men who know how to live.  They are no longer prepared to exist or cope or endure. They are not satisfied with star-gazing at home. They have done this all their working lives and it is no longer enough for them. Now they are ready to LIVE. And if they are to live, there is only one method, that is, they must FOLLOW the star.

It is this point that I predict Pope Francis will pick up in his Epiphany homily on Monday, since his words and actions over the past nine months have encouraged all of us to leave our security and comfort to feed the poor, (in every sense both of nourishment and poverty) and so to take the gospel to the peripheries and beyond.

The wisdom of these Eastern Magi was not the result of intellectual excellence and academic degrees. While no doubt they were bright guys, their wisdom did not come from their astute observations of distant galaxies. The answer they sought was not distant but surprisingly close to home. These men were wise men because they were able to notice the desires that remained unsatisfied within their own hearts. They also knew exactly what, no, WHOM they were looking for. As they announced when they arrived in Jerusalem ““Where is the newborn king of the Jews? We saw his star at its rising and have come to do him homage.”  Four hundred years later Augustine would articulate this reality: our hearts are created by God and for God, and we remain restless until we live in God.