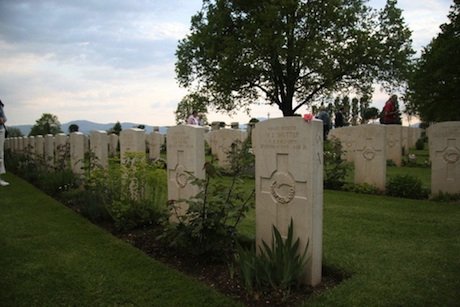 In just a few hours many thousands of New Zealanders will attend dawn services to remember and pray for those New Zealanders who have died in war. On this Anzac day in 2008, thirty pilgrims from Our Lady of Victories parish, Christchurch prayed at the NZ Monte Cassino war graves in Italy.

The day had not gone according to plan in many ways. Our bus from the Rome hotel was four hours late. We would not be able to see both Pompeii and Monte Cassino in the one day as planned.

After a frustrating morning waiting for the bus in Rome, our wonderful tour guide (Paola) took us to lunch (paid for by the bus company). A second bonus was the bus would arrive at 1pm, take us to Monte Cassino, then the following day the bus would also be at our disposal enabling us to have a more relaxed trip to Pompeii.

So there we were at midday, Anzac Day in Rome, eating good free food, drinking very good “Seven Hills” wine (also paid for by the bus company), and early afternoon we headed to Monte Cassino.

It was later clear to us that God was in control ensuring that our planned single busy day, would become two relaxed days with time to savour the depth and beauty of all we were to experience. 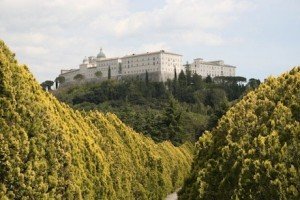 The Benedictine Monastery of Monte Cassino is on the hill top above the town – a great vantage point. This was part of the reason that a significant battle of WWII was fought there.

After visiting the monastery, founded by Benedict in the sixth century (a blog entry for another day), we bussed back down the hill to the cemeteries. 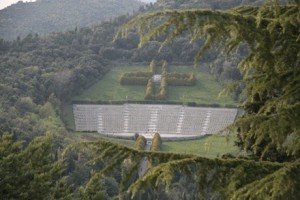 Our first stop was the Polish Cemetery. This was significant for our group since Joseph, originally from Poland was with us. It was deeply moving to see Joe move from grave to grave recognising names and families of compatriots.

An inscription at these graves reads:

Joseph then led us in prayer in his original language.

Then we moved to the New Zealand war graves. 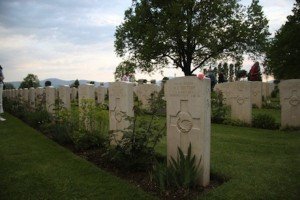 343 New Zealanders died at Monte Cassino. The total casualty count from this four-month battle was over fifty thousand soldiers. We wandered among these graves, silently, recognising family names and home towns. Then we gathered and prayed, singing the soldiers sun-down prayer (Taps):

Day is done.
Gone the sun.
from the sea,
from the hills,
from the sky.
All is well.
Safely rest.
God is nigh.

May all who have died in war, rest in God’s peace. and may rulers and governments learn
that true peace can never be achieved through violence of any kind.