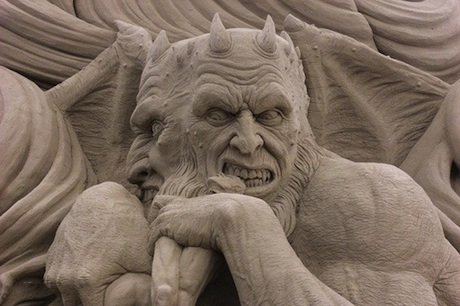 “Everyone loves Pope Francis” the woman announced to all the shoppers a few weeks ago in the Cheviot Four Square store. Her affirmation is widespread since something about the pope’s method and manner has attracted and captivated people across the planet.

However few people have read little if any of what Pope Francis has taught in his daily homilies, reflections, letters and encyclical. The popular view of the pope is formed by audio and visual news-bytes, and few people know that much of what Pope Francis is teaching is anything but “popular teaching.” Take this morning’s discreet news headline “A modern pope gets old school on the Devil.”

The news brief suggests that Pope Francis has spoken more explicitly about the reality of the devil more than any other pope in the last five decades. Someone once suggested that the greatest success of the devil in our time is that he has managed to convince most people that he does not exist. This is a success because people would never bother to be on guard against something that does not exist, and as a result the devil has easy entry into human lives and hearts.

Perhaps it is the pope’s Jesuit formation and familiarity with the Spiritual Exercises of St Ignatius Loyola that enables him to speak freely about the devil in our present-day environment of politically-correct avoidance of the reality of the prince of darkness.

I am not sure how someone who does not accept the existence of the devil could explain the presence and power of evil. I too often find myself in the tension of St. Paul doing the things I don’t want to do and not doing the very things I most deeply desire to do! Romans 7.15. I am grateful that I can see that much of the evil in me is not of my creation, but is the evidence of the evil one who is seeking to derail my good intentions and upset my inner peace.