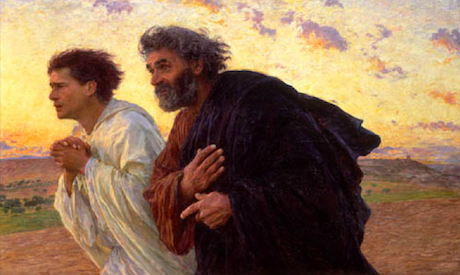 It has been an inspiration and a privilege in recent weeks to spend time reflecting on the reality of the resurrection of Jesus with several different groups. For too many people, Christian faith has been tragically reduced to cultural propriety or religious practice. But it is only a vibrant and living relationship with Jesus Christ who is alive, that is an adequate response to the yearnings of the healthy human heart.

This afternoon I completed another weekend session during which I was encouraged and inspired by those I was with as together we eagerly allowed Christ to be come our own. The key image of these spiritual exercises, based on the Exercises presented by Fr. Julian Carron a few weeks ago, was the expectation, excitement and desire we see in this Eugene Burnand image of Peter and John running to the tomb on the morning of the resurrection. Mary Magdalen had reported that Jesus had risen, but her word was not enough for them, they were eager to experience this fact for themselves.

And so, several times in recent weeks, in the Philippines and in Australia, I have had the privilege of being a part of gatherings of friends together “pressing on to make him our own.” You can get a taste of the introduction at this link.