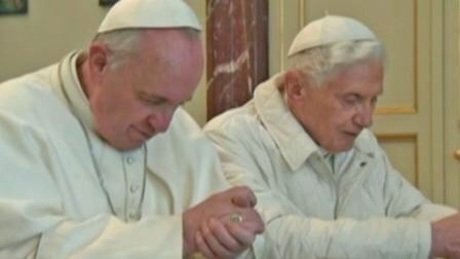 I imagine this will be the scene in Rome on Sunday when Pope Francis and Emeritus Benedict kneel in front of the plasma screen to each cheer on their own national teams in the World Cup final between Germany and Argentina.  One month ago for the opening of the World Cup, Pope Francis (who is publicly maintaining his neutrality) issued this greeting to all those taking part.

In preparation for Sunday’s final it is timely to reconsider the analogy that he draws between good sportsmanship and life. You can read his brief message at this link.   Pope Francis World Cup Message.