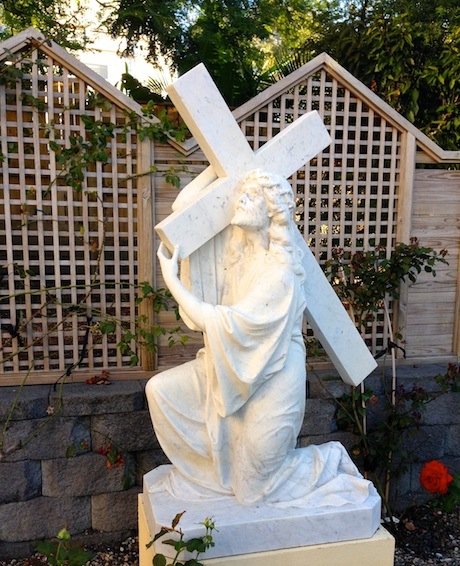 In the early 1980‘s I lived for six years preparing for priesthood at Holy Cross seminary in Mosgiel. In the late 1990’s when the number of seminarians was relatively low, the seminary was shifted to Ponsonby in Auckland where a new surge of passion for the life of faith has seen significant growth to the extent that the new complex is now too small for the growing number of candidates.

The feast day of New Zealand’s national seminary is today’s feast of the Exaltation of the Holy Cross, and this marble statue of Jesus taking up his cross has confronted New Zealand’s diocesan seminarians in pride of place on the seminary sites both in Mosgiel and in Auckland for over a century.

I had booked a train ticket to travel from Timaru to Mosgiel on the day I entered the seminary in February 1980, but happily, the evening before Jack (my uncle, also a priest of the Christchurch Diocese) arrived at my home offering to drive me down. I remember a lot about the journey, including the stop to visit my maternal grandparents in Oamaru, (it was my grandmother’s birthday), a picnic lunch on the beach at Karitane, an early afternoon movie in Dunedin, and the drive through the seminary gates just after 5pm when I was greeted with the image of Jesus carrying his cross out the gates. When I finished my studies six years later I again drove past the statue, this time in the direction that Jesus was facing, heading out through the gates.

My understanding and appreciation of “the cross” has grown greatly, especially in recent years. I had always known that at times life is difficult, and that as Jesus had to carry his cross, so too each of us who seek to follow Jesus have our own crosses. I knew too that Jesus helps us to carry our crosses and every day he eases the burden of our struggles.

In recent years I have grown to appreciate that when Jesus said “take up your cross and follow me” (Luke 9:23), he was reminding us that the many ways in which we might feel burdened with life’s crosses in fact provide the only way that we can grow to full human maturity. What Jesus is telling us is that the cross is not just a difficulty or an obstacle, but that the cross, carried through suffering to death, IS the pathway. A couple of examples might help us to understand this.

How often when in a Moses moment someone announces a new and untried way forward the community responds with: “we can’t think that way…because we have never thought that way before.”

And the greatest tragedy is that this confined way of thinking is often more common in communities of faith than in many secular environments.