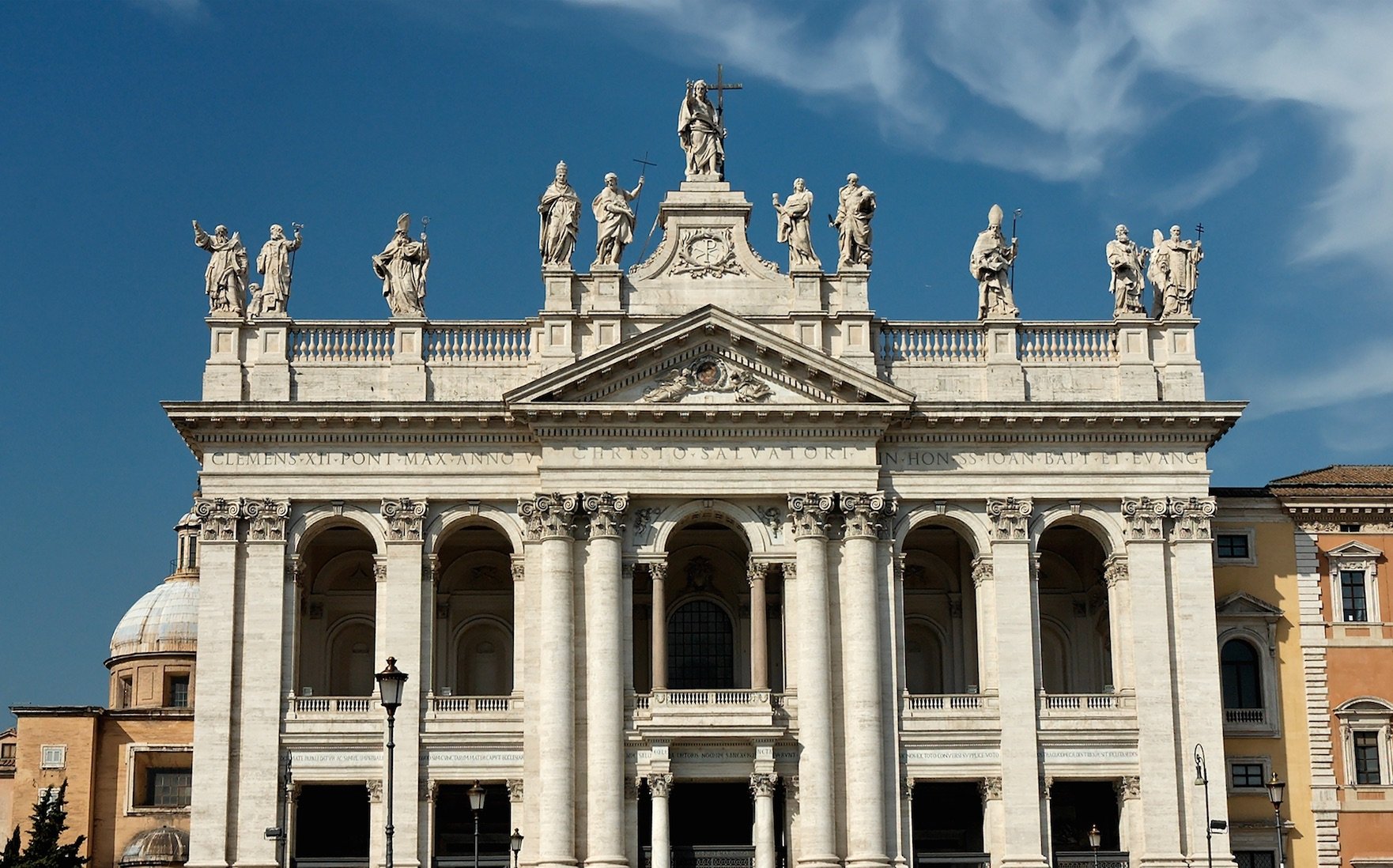 This weekend’s feast of the Dedication of the Roman basilica of St. John Lateran might seem like a strange focus for a Sunday. It’s not very often we get to celebrate this solemnity on a Sunday, so this weekend we are presented with an invitation to give a thought to a feast which has particular significance for a diocese about to embark on rebuilding and renovating churches destroyed or damaged by earthquakes.

It was the emperor Constantine who built the first basilica on the Lateran site in the early fourth century. At least a couple of times since it has fallen into decline, most especially during the 14th century years of the Avignon papacy. In the early 18th century the facade (above) was reconstructed and the entire building re-dedicated to “Christ the Saviour, in honour of Saint John the Baptist and Evangelist” as the inscription and statues atop the facade proclaim.

This Lateran basilica is the Cathedral church of the bishop of Rome who is the pope. While St. Peter’s is the larger church and more suited to big gatherings of people, the pope’s cathedra (bishop’s chair) is in the Lateran basilica.

In the last fifty years we have grown in our appreciation of the “Church” as the body of worshipping people. We, the people of God, are the Church. However we know too the power of a Church building as an image that serves to teach us about God and about the things of God, indeed to raise our minds and hearts to God. Our children and grandchildren who may have limited contact with a local parish community themselves, often speak on returning from overseas about the beauty of the churches that, even by their exterior beauty, attracted them to venture to savour the sacramental forms inside. Perhaps they were even enticed to worship.

This weekend’s feast is particularly timely for us here in the Christchurch diocese where a major programme of building, rebuilding and renovating churches is ahead of us in the next few years. The first step in such a project must be the education and formation of the people so that we know what and why we need to build good churches.

To this end Bishop Barry Jones invited the architectural theologian Denis McNamara to visit our diocese in August last year for a series of seminars focussing on the nature of the Catholic church building. His talks were very well received. A number of people commented to me later that no one had ever taught them this stuff. They added that they had found Denis’ presentations to be inspiring and that somehow they knew what he was saying to be very right and necessary if a church building is to be a helpful sign of God.

One of Denis’ most inspiring books is titled Catholic Church Architecture and the Spirit of the Liturgy. He begins his introduction:

The time of image is the time in which we live, a time when we come to know God through sacramental forms which present earthly images of heavenly reality. It is in the Church, founded at Pentecost with the descent of the Holy Spirit, that God communicates himself to us. Every revelation of God is clear, whole and ordered. In a word, it is Beautiful, True, and Good because God is himself Beauty, Truth, and Goodness. We know God as he reveals himself: through his Son, in the material things of this world, transformed by the Holy Spirit to become transparent of heavenly things. And we call things beautiful when they reveal to us their inner essence, their reality as understood in the mind of God, who knows no untruth and inspires people to act toward the Good. Any book about liturgical art and architecture therefore must be a book about Beauty, Truth and Goodness because liturgical art and architecture are about a compelling revelation of God which moves us to grow in conformity to him. Since Beauty is the compelling power of Truth, its splendour and attractiveness draw us out of ourselves to approach and investigate a beautiful thing. We can then be transformed by it. pg.1

I suspect there is not another parish in the world that has six churches as beautiful as our Hurunui parish churches. Our churches include some that are among the oldest in the diocese and the most lovingly maintained. In a couple of our communities people ensure that the church is open for prayer all day every day.

The visibly wide-open door of a church is a powerful sign and an attractive invitation to people who need an opportunity to spend a few moments in a place of peace where they know that God will gaze on them with love.