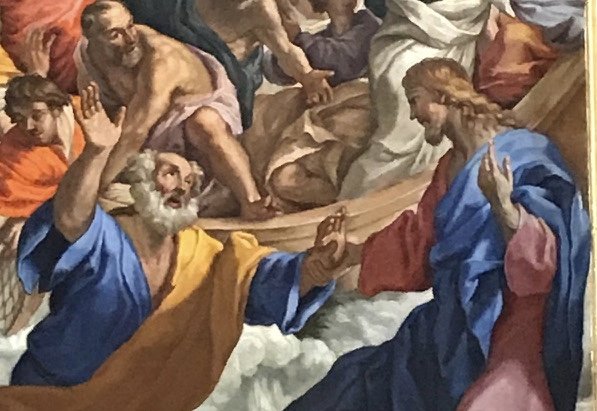 I landed in Rome early last Monday afternoon and early Tuesday morning arrived at St. Peter’s basilica just before it opened at 7.

It’s a great time to visit the basilica, early morning, an hour or two before the tourists overtake the pilgrims who arrive early for the first Masses of the day. After vesting I was led by a server into the basilica and was happy to discover that my choice of the Altar of the Navicella of St Peter was available for Mass.

The large mosaic above the altar depicts the scene from this weekend’s Sunday gospel: The disciples are in their boat,“tossed about by the waves” and filled with fear. Their anxiety blinds them to the reality of the presence of Jesus walking towards across the choppy sea. “It is a ghost, they said, and cried out in fear.”

“At once Jesus spoke to them, “Take courage, it is I; do not be afraid.”  Peter said to him in reply, “Lord, if it is you, command me to come to you on the water.” He said, “Come.” Peter got out of the boat and began to walk on the water toward Jesus.”

But take note of what happens next:

“When Peter saw how strong the wind was he became frightened; and, beginning to sink, he cried out, “Lord, save me!”  Immediately Jesus stretched out his hand and caught Peter, and said to him, “O you of little faith, why did you doubt?”  After they got into the boat, the wind died down.”

Many homilies preached this weekend will focus on the importance of staying in the boat and trusting Jesus who is in our boat. One blogger has titled his comment on this passage “The Barque of Peter in shark-infested waters.”  Another continues the fearful theme advising “We must stay in the Barque of Peter for salvation.”

I find it difficult to see the connection between these prophecies of doom and the power and hope offered to us by the person of Jesus.

It is concerning to see the recent flourishing of voices encouraging Christians to retreat into holy bunkers in order to save themselves. Their argument is that Christians have lost the battle against the world.

One of the most popular Christian books in English at the moment is Rod Dreher’s “The Benedict Option” .

Beneath the author’s many useful tips for Christian communities his veiled motivation is an often subtle encouragement for Christians to give up on life in the world and to retreat to the cloister. He explicitly names the failure of the Christian campaign against gay marriage as the final straw.

Fifty-five years ago Pope John XXIII opened the Second Vatican Council with a faith-founded vision of hope: “We feel that we must disagree with these prophets of doom, who are always forecasting worse disasters, as though the end of the world were at hand”.  He continued “Present indications are that the human family is on the threshold of a new era. We must recognise here the hand of God…”  11 October 1962

Pope Francis continues the hope-filled exhortation reminding those of us who fear the choppy waters that “We are not living an era of change but a change of era.”  10 November 2015

I suppose it is a characteristic of human experience to reduce complex perspectives and situations to a simple game of two teams. In story-telling we speak of the goodies and the baddies. However human existence is a much more complex reality and there is (as the saints remind us) good and bad in everyone. The idea that church is good and world is bad is a naive reduction at best. More likely it is a simplistic reaction promoted by those who like to keep life and people in constricting uniforms and tidy boxes.

To again pick up the image from the gospel, many well-intentioned Christians are in retreat mode (ie battle retreat not prayer retreat) seeking solace in rules and rituals without evidence of relationship.

I have no doubt that those who seek refuge in fear-filled boats and who remain faithful in practices of religion will find salvation.  God is good like that. Jesus is willing to stay with the ship of anyone who calls out “Lord save me”.

But the real saints of this new era are those who are not afraid to step out of the boat and with gaze fixed firmly on Jesus Christ walk towards him through turbulent, difficult and even risky circumstances. An intent focus on Jesus elevates our gaze beyond our own fears, limits and struggles to the One who has the desire and the ability to save us.

With each step towards Jesus we discover that we are flooded not with threatening waters but with divine courage.

The presence of Jesus is not a ghostly apparition but an inviting reality, the person of God-with-us. It is Jesus Christ who enables us to walk and work with faith and freedom in  every complex circumstance of twenty-first century life, in our diverse families and demanding workplaces, alongside faithful friends and fearsome enemies, and even in friendship with those who remain convinced that a divine savour is not necessary and that salvation is available to all who make the grade by their own determination and hard work.

The witness of the twenty-first century companions of Jesus is not motivated by a compulsive or fearful need to entice or drag others into our little boats. Instead we are faithful disciples when we calmly keep our gaze fixed on Christ. It is this gaze that saves us whether we are hiding in our boat or embracing the ultimate adventure of faith by walking towards Jesus, even across the waters.

After all, if our gaze is fixed on Jesus we have nothing to fear. 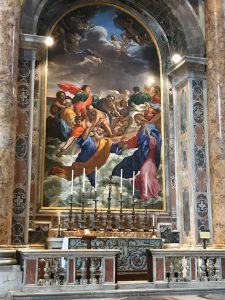