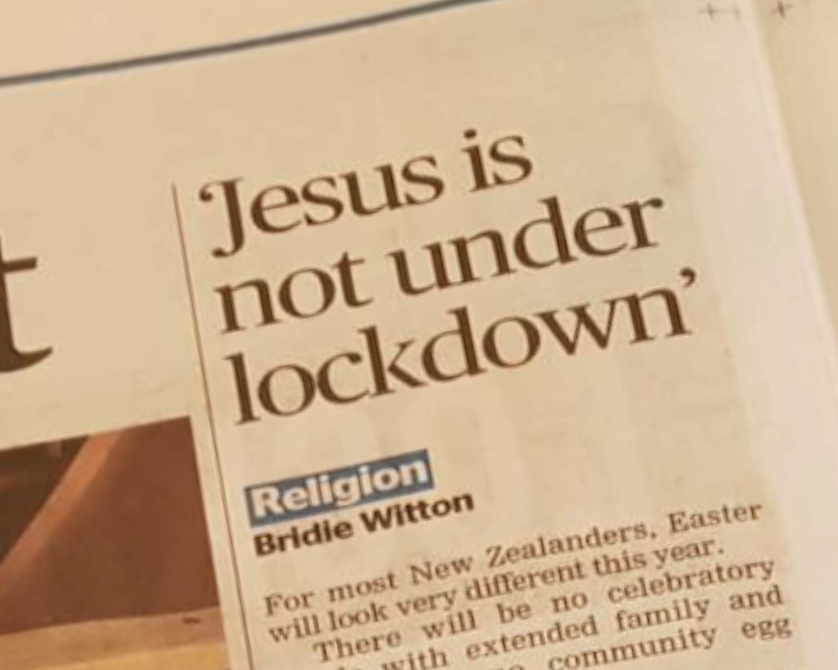 As a child spending Easter at my grandparents’ farm I learnt a lot about resurrection.

My grandmother would get me out of bed for the Easter morning sunrise following the ancient belief that the sun dances to celebrate the resurrection. Then just before breakfast my grandfather would bring chocolate eggs in from the henhouse. After having witnessed the cosmic effects of the resurrection of Jesus in the dancing sun it didn’t seem too surprising that the hens were also affected!

In recent FFF reflections we have reflected that the resurrection of Jesus was not a simple resuscitation of a corpse as happened to Lazarus. Poor old Lazarus had to go through death again as an older man. Jesus was not just brought back from death, but rather passed through death to the totally new reality of life for which we have been created.

The resurrection of Jesus is a cosmic event bridging heaven and earth. As the Easter Proclamation (Exultet) announces at the Easter Vigil: “O truly blessed night, when things of heaven are wed to those of earth, and divine to the human.”

Early on that Sunday morning as the women came from the tomb with news that the body of Jesus was not there, it seems the disciples of Jesus were literally all over the place. The women meet Peter and John who on hearing the news immediately run to the tomb, and gradually as this new day passes through morning to afternoon others receive the news in a variety of places, in their homes or on the road as the two on their walk to Emmaus.

The scriptures record that over the next few days many people encounter the risen Jesus, including one group of over 500 of his followers.

We know that Jesus was not simply resuscitated because he did not look the same (he was not recognised by his closest friends), he could pass through locked doors, but he was not a ghost since he still ate food.

Within a few days, as the authorities react to the news of the empty tomb, the followers of Jesus began to fear for their own lives and a week later (according to the timeline in the gospels) we find them in a room with doors closed and locked.

While we might initially think their situation was similar to our 2020 lockdown reality, it is important to understand the difference: the disciples had locked their doors from the inside motivated by their fear. Our COVID lockdown is imposed from outside of ourselves. The disciples were not in lockdown. They had locked themselves up because they were fearful.

The disciples were huddling together with a fear that, while understandable, was not consistent with a real and felt experience of the risen Jesus who greets us with the words: “do not be afraid.”

I’m thinking about a couple of situations that I’m feeling a bit of fear about at the moment. You might like to take a moment to call to mind one or two of your own present anxieties.

As I write this Easter reflection I see with greater clarity that while the negative situations I face are real, the fear I feel is really my own choice.  Because Jesus is risen and alive and present, I now have an alternative, a hope-filled way through my fears. This path involves accepting the fact that I am not locked down but I have instead allowed my fears and anxieties to lock me up.

As yesterday’s Dominion Post proclaimed “Jesus is not under lockdown!” And if we stay with Him, we can live the same freedom.

The disciples of Jesus grew to appreciate this fact so that when it comes to Pentecost fifty days after the resurrection, they are in one place but there is no mention of closed or locked doors. During those fifty days they had moved around a bit, from Jerusalem to Galilee, a thirty hour walk (thanks to Google maps for that info) and back again to Jerusalem for Pentecost. This indicates that they were not in lockdown or even lockup but beginning to live with a growing appreciation of what it meant to be in relationship with Jesus who was even more alive and present than he had been before his death.

Most of us spend most of our lives failing to accept the life and freedom that is ours as Christians. We make the mistake of following Jesus as we might a wise historical hero or teacher, forgetting that we are being invited and enticed into an intimate relationship with Jesus who is God alive and seeking to be in love with us.

Often what blocks hope is the stone of discouragement.Once we start thinking that everything is going badly and that things can’t get worse, we lose heart and come to believe that death is stronger than life.  We become cynical, negative and despondent.  Stone upon stone, we build within ourselves a monument to our own dissatisfaction: the sepulcher of hope. Life becomes a succession of complaints and we grow sick in spirit.  A kind of tomb psychology takes over: everything ends there, with no hope of emerging alive.  But at that moment, we hear once more the insistent question of Easter:Why do you seek the living among the dead?The Lord is not to be found in resignation.  He is risen; he is not there.  Don’t seek him where you will never find him: he is not the God of the dead but of the living (cf. Mk 22:32).  Do not bury hope!…

…The women, remembering Jesus, left the tomb.  Easter teaches us that believers do not linger at graveyards, for they are called to go forth to meet the Living One.  Let us ask ourselves:In my life, where am I going?  Sometimes we go only in the direction of our problems, of which there are plenty, and go to the Lord only for help.  But then, it is our own needs, not Jesus, to guide our steps.  We keep seeking the Living One among the dead.  Or again, how many times, once we have encountered the Lord, do we return to the dead, digging up regrets, reproaches, hurts and dissatisfactions, without letting the Risen One change us?

Dear brothers and sisters: let us put the Living One at the centre of our lives. Let us ask for the grace not to be carried by the current, the sea of our problems; the grace not to run aground on the shoals of sin or crash on the reefs of discouragement and fear.  Let us seek him in all things and above all things.  With him, we will rise again.

Thanks to Billy, & Wilson & Jessica  for the The Empty Tomb LEGO art below: 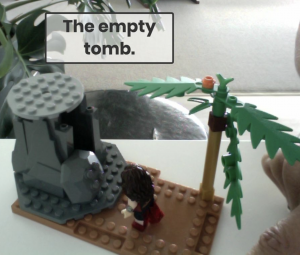 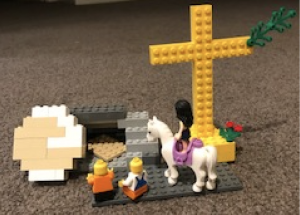