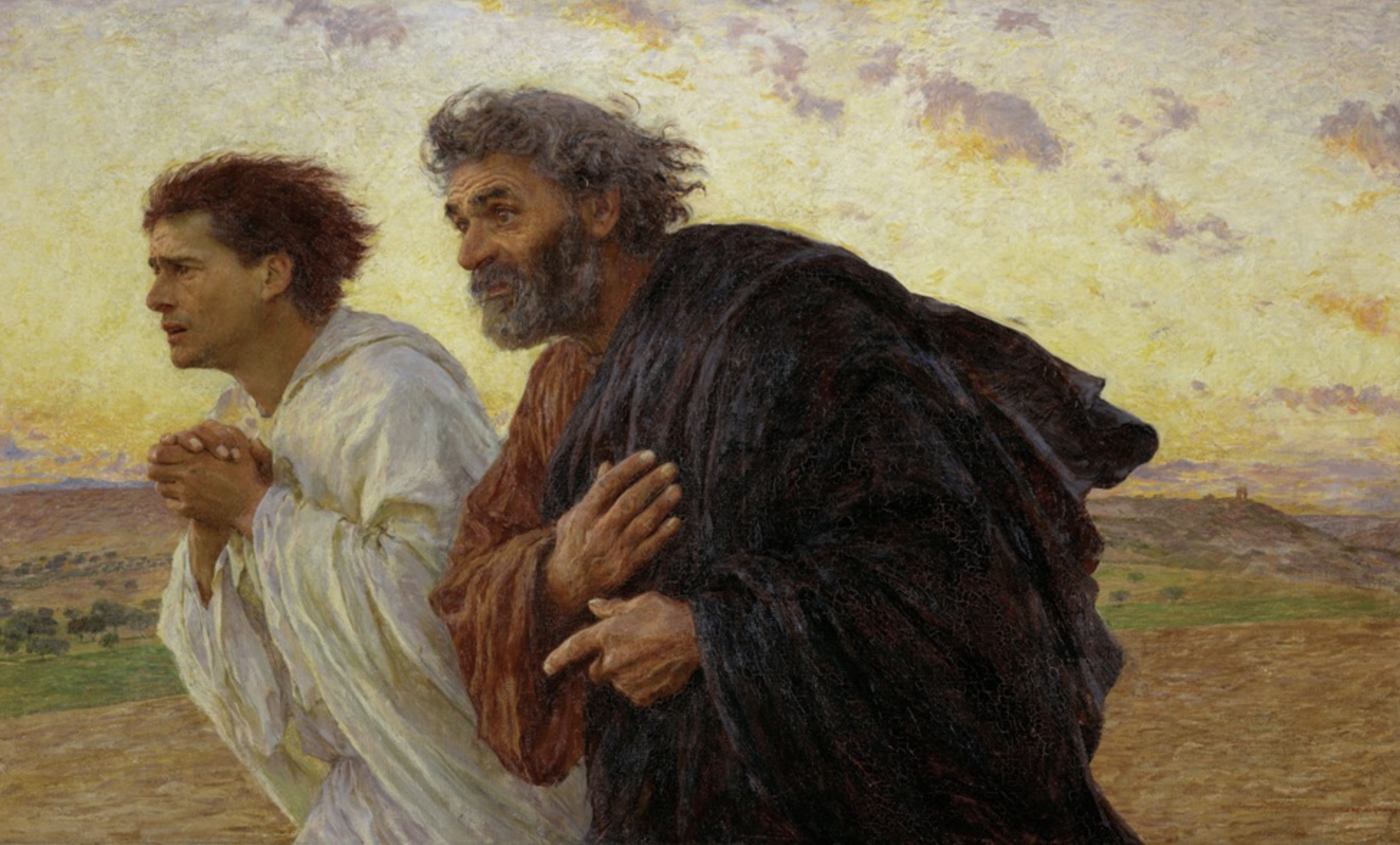 Today’s Easter reflection is offered both as podcast and text. If you only have limited time, you might skim the text savouring the Pope Francis quotations in blue.

The Lord has risen from the dead.

This is the traditional Easter greeting, and we respond:

He is risen indeed! Alleluia.

This Easter Sunday morning, Happy Easter to you all, especially to those who have journeyed with these Food For Faith reflections over the Lenten Weeks of preparation and anticipation.

This great feast is not only the heart of the Christian year, but the centre, the core, the meaning of all human existence.

Let’s take a moment to reflect on that.

Now this had never happened before. There had been resuscitations – remember Lazarus. Lazarus was resuscitated but this meant that the poor guy had to go through death again as an older man. Imagine the eulogies (and the jokes) at his second funeral!

So when the women encountered Jesus risen, and could see the this wasn’t just a resuscitation, can you imagine how NEW this was for them. They (followed shortly after by the rest of the disciples of Jesus) would struggle to comprehend what this meant not only for Jesus but for themselves and for their relationship with him.

Those first followers of Jesus would have known well that death is not just an end but the end. However in the days and weeks after the resurrection of Jesus the disciples realised that the new life was not only Jesus’ new life, but a new life for them as well.

Now they did not have to be content with coping or surviving, but when in conscious relationship with Jesus they could LIVE.

For two thousand years adventurous people have been discovering this new and life-giving realm of earthly existence, a way of living that enables us to transcend daily grinds. A way of living that gives meaning to every event, encounter, conversation and conflict.

A week ago in his homily for Palm Sunday Pope Francis wondered how the same people who welcomed Jesus into Jerusalem waving palm branches could just a few days later call out for his blood.

Then Francis warned that we too fall into the same trap of following an idea of the Messiah rather than the Messiah.

They admired Jesus, but they did not let themselves be amazed by him. Amazement is not the same as admiration. Admiration can be worldly, since it follows its own tastes and expectations. Amazement, on the other hand, remains open to others and to the newness they bring. Even today, there are many people who admire Jesus: he said beautiful things; he was filled with love and forgiveness; his example changed history, … and so on. They admire him, but their lives are not changed. To admire Jesus is not enough. We have to follow in his footsteps, to let ourselves be challenged by him; to pass from admiration to amazement.

I understand this, and even on this morning of the resurrection we can look back two thousand years with a polite admiration which is completely inadequate for mature twenty-first century disciples.

Our problem is that we are comfortable with admiring people. It requires nothing of us and we can remain in complete control over how much we admire someone.

Admiration gives a safe distance from the challenge (and therefore the inspiration) of a God who has now overcome even death and who invites and enables us to live in a way that is not simply human but is also divine. We can escape the challenges and the intimacy of relationship if we settle for admiring someone.

But instead of accepting this invitation to be amazed by Jesus we too often prefer to seek contentment in muddling along with our petty attachments to power, wealth and other possessions which promise everything and deliver nothing, and we learn to live with an emptiness that is (because of the resurrection) completely unnecessary.

I can’t help at this point thinking back twelve months to Pope Francis’ homily to the world as Covid began to shake us. At that time he called the pandemic a storm that exposes our vulnerability, uncovering those those false and superfluous certainties around which we have constructed our daily schedules, our projects, our habits and priorities.

this storm shows us how we have allowed to become dull and feeble the very things that nourish, sustain and strengthen our lives and our communities. The tempest lays bare all our prepackaged ideas and forgetfulness of what nourishes our people’s souls; all those attempts that anesthetize us with ways of thinking and acting that supposedly “save” us, but instead prove incapable of putting us in touch with our roots and keeping alive the memory of those who have gone before us. We deprive ourselves of the antibodies we need to confront adversity.

In this storm, the façade of those stereotypes with which we camouflaged our egos, always worrying about our image, has fallen away, uncovering once more that (blessed) common belonging, of which we cannot be deprived: our belonging as brothers and sisters.

There’s  a wonderful image a painting by Eugene Burnand in the late 19th century, a work that depicts Peter and John running toward the tomb on the morning of the resurrection after hearing from the women that Jesus has risen. They are running, not dawdling or strolling, but running. The look on their faces is one of amazement.

We will hear of this gaze of amazement every day of this Easter week in scriptures that tell of the response of disciples to news of the resurrection.

A look of amazement is the perfect response to an experience that doesn’t match our expectations or fit into our pre-packaged concepts of religion. Such amazement is filled with a diverse mixture of emotions: incomprehension, confusion, wonder, puzzlement, joy, doubt …  all of these a part of the feeling of being amazed, and the disciple of Jesus is one who doesn’t just feel amazed every now and then, but who lives amazed.

There’s a bit of fear there too – that’s also at home in a response of amazement – fear that if the news the women brought was really true then they would have to face the one they had denied, betrayed, abandoned three days earlier.

This is why the first words of Jesus to the disciples in every post-resurrection encounter are do not be afraid.

Do not be afraid.

There are so many things that fill us with fear: our guilt, shame, insecurities, addictions, vulnerability, fear in relationships, work and financial security. So many fears.

Do not be afraid says Jesus.

A couple of days ago on Good Friday Pope Francis was onto something when he gave children the task of writing his Stations of the Cross.  While the children wrote of child-hood fears, we adults can easily relate:

You know that we children also have crosses to carry. Crosses that are no lighter or heavier than those of adults, but are still real crosses, crosses that weigh us down even at night. Only you know what they are, and take them seriously. Only you.

Only you know how hard it is for me to learn not to be afraid of the dark and all alone.

Only you know how hard it is to wake up every morning after wetting the bed.

Only you know how hard it is to think quickly and to learn grammar and math.

Only you know how hard it is to see my parents fight and slam the door and not talk to each other for days.

Only you know how hard it is to be made fun of, and not be invited to parties.

Only you know what it means to be poor and have to do without things my friends have.

Only you know how hard it is to reveal a terrible secret, not knowing who to tell for fear of being betrayed, accused or not believed.

Take some time now, a few moments of stillness and silence, and become aware of your own feelings this Easter Sunday. Let yourself move from admiration to amazement.

Ask Jesus to give you this gift of amazement at his love for you, love that he showed by giving everything, even life, for you.

Speak to Jesus about your need.

Ask Jesus for the Easter Miracle that you most need this Easter.