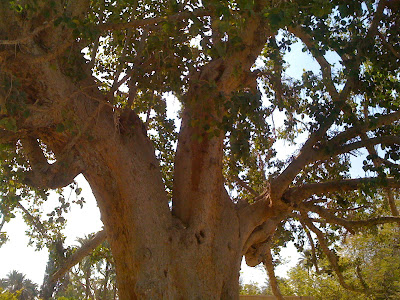 We are now back in Jerusalem after leaving the Galilee region. Our bus journey took us south to Jericho.
Jericho is the oldest continuously inhabited city in the world.  It is the site of many great Old Testament losses and triumphs.  You can read about some of these at this link.
You know the story of Jesus encounter with Zacchaeus. This is the place. There is only one sycamore tree in the area and it is known to be very old – the locals think it to be at least 2000 years old, but I suspect they are just saying what the tourists and pilgrims want to hear.  This particular tree is most likely to have sprouted from a shoot or seed of the original tree.
Take a moment to read the Zacchaeus account at this link. (Luke 19:1-10)
Zacchaeus’ luck began with his own initiative in climbing the tree. He simply wanted to seek Jesus. His aim was not to follow, but, from a safe distance, simply to SEE Jesus. And, then his whole life changed. Jesus noticed him and called him. ‘Zaccaheus, I want to go to YOUR house NOW.’

In that encounter the life of this ‘little’ man was changed for ever. Zacchaeus, who was used to living on the fringe of the group, was the centre of the story forever. Two thousand years later whenever people heard the name of the town ‘Jericho’, they would think ‘Zacchaeus’! All these years later this shy guy is the greatest money earner for the city and everyone is grateful to him. But he did NOTHING except follow his desire to see Jesus and climb a tree. Jesus did the rest!

How little Jesus needs from us!

I recall Pope John Paul II writing to priests one Holy Thursday saying that a more accurate translation of this story is that Jesus said to Zacchaeus: “I NEED to come to your house today”.
Mutual need is what leads two humans to RELATIONSHIP. We can speak of Jesus’ ‘need’ since he seeks to be in personal relationship with each of us. It is Jesus willingness to enter this relationship with me that provides for every need I have.
+++

5. The story, as we know, presents the meeting between Jesus and Zacchaeus as if it happened by chance. Jesus enters Jericho and moves through the city accompanied by the crowd (cf. Lk 19:3). In climbing the sycamore tree, Zacchaeus seems prompted by curiosity alone. At times, God’s meetings with man do appear to be merely fortuitous. But nothing that God does happens by chance. Surrounded by a wide variety of pastoral situations, we can sometimes lose heart and motivation because so many Christians pay too little attention to the sacramental life, and even when they do approach the sacraments, they often do so in a superficial way. Those who hear many confessions and see how people ordinarily approach the sacrament can be disconcerted by the way certain penitents come to confession without even a clear idea of what they want. Some come only because they feel the need to be listened to. Others because they want advice about something. Others have a psychological need to be released from burdensome feelings of guilt. Many, on the other hand, feel a real need to restore their relationship with God, but they confess without being really aware of the obligations which this entails. They may make a poor examination of conscience because they have little knowledge of the implications of a moral life inspired by the Gospel. Is there any confessor who has not had this experience?

This is precisely the case of Zacchaeus. Everything that happens to him is amazing. If there had not been, at a certain point, the “surprise” of Christ looking up at him, perhaps he would have remained a silent spectator of the Lord moving through the streets of Jericho.

Jesus would have passed by, not into, his life. Zacchaeus had no idea that the curiosity which had prompted him to do such an unusual thing was already the fruit of a mercy which had preceded him, attracted him and was about to change him in the depths of his heart.

Dear Priests, with so many of our penitents in mind, let us re-read Luke’s magnificent account of how Christ behaved: “When Jesus came to the place, he looked up and said to him, `Zacchaeus, make haste and come down; for I must stay at your house today’” (Lk19:5).

Every encounter with someone wanting to go to confession, even when the request is somewhat superficial because it is poorly motivated and prepared, can become, through the surprising grace of God, that “place” near the sycamore tree where Christ looked up at Zacchaeus. How deeply Christ’s gaze penetrated the Jericho publican’s soul is impossible for us to judge. But we do know that that same gaze looks upon each of our penitents. In the Sacrament of Reconciliation we are agents of a supernatural encounter with laws of its own, an encounter which we have only to respect and facilitate. For Zacchaeus, it must have been an stunning experience to hear himself called by his name, a name which many of his townsmen spoke with contempt. Now he hears it spoken in a tone of tenderness, expressing not just trust but familiarity, insistent friendship. Yes, Jesus speaks to Zacchaeus like an old friend, forgotten maybe, but a friend who has nonetheless remained faithful, and who enters with the gentle force of affection into the life and into the home of his re-discovered friend: “Make haste and come down; for I must stay at your house today” (Lk 19:5).

6. Luke’s account is remarkable for the tone of the language: everything is so personal, so tactful, so affectionate! Not only is the text filled with humanity; it suggests insistence, an urgency to which Jesus gives voice as the one offering the definitive revelation of God’s mercy. He says: “I must stay at your house”, or to translate even more literally: “I need to stay at your house” (Lk 19:5). Following the mysterious road map which the Father has laid out for him, Jesus runs into Zacchaeus along the way. He pauses near him as if the meeting had been planned from the beginning. Despite all the murmuring of human malice, the home of this sinner is about to become a place of revelation, the scene of a miracle of mercy. True, this will not happen if Zacchaeus does not free his heart from the ligatures of egoism and from his unjust and fraudulent ways. But mercy has already come to him as a gratuitous and overflowing gift. Mercy has preceded him!