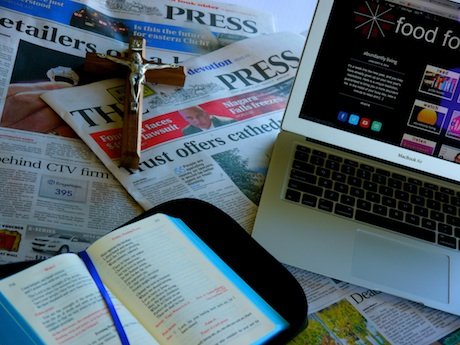 When speaking about the importance of the homily in his recent exhortation “The Joy of the Gospel” Pope Francis commented that both the people and the preachers “suffer because of homilies: the laity from having to listen to them and the clergy from having to preach them!” The exclamation mark at the end of the sentence suggests that he might have had tongue in cheek when writing this. While that might be true, he is also serious since he continues “it is sad that this is the case.” parag.135

At the time of my own ordination thirty years ago, I knew at least a couple of priests who simply read their homilies from published collections prepared ‘for every Sunday and all occasions’. They would keep these books at the lectern and just open to the relevant page while the people were sitting down after the Gospel. Pope Francis is harsh in his judgement of such preachers: “A preacher who does not prepare is not “spiritual”; he is dishonest and irresponsible with the gifts he has received.”

Increasingly the internet has become an important tool for preachers in preparing their homilies and sermons. This essential research, partnered with the preachers personal intimacy with Christ, and pastoral and practical immersion in the joys and the hopes, the griefs and the anxieties of the people, is the stuff of homily preparation.

Unlike some preachers, I enjoy the homily preparation process. Most times I end up with too many ideas, and more more material than I can use in a 7 minute reflection. In the past few years I have blogged some of these ideas through the following weeks. Often the material is set aside unused.

That’s a long way of introducing this new section of the foodforfaith website. Each week I will upload a post entitled “homily studio,” followed by the date of the relevant Sunday eg 12 Jan.  On this page I will simply drop a selection of possible homily starters and resources. It is up to the preacher then to pick and choose from the smorgasbord of possibilities.

That’s enough intro. On to the homily studio for this week.

Wednesday Audience:   On Wednesday of this week Pope Francis began a series of catechesis on the Sacraments. This week’s reflection was on the Sacrament of Baptism. You can read his brief teaching at this link http://www.zenit.org

Know the date, and celebrate the anniversary:  Pope Francis has made this point on a few occasions, including last Wednesday’s Audience:

I have asked this question two or three times already, here, in this square: who among you knows the date of your Baptism, raise your hands. It is important to know the day on which I was immersed in that current of Jesus’ salvation. And I will allow myself to give you some advice… but, more than advice, a task for today. Today, at home, go look, ask about the date of your Baptism and that way you can bear in mind that most beautiful day of Baptism. To know the date of our Baptism is to know a blessed day. The danger of not knowing it is losing awareness of what the Lord has done in us, the memory of the gift we have received. Thus, we end up considering it only as an event that took place in the past – and not by our own will but by that of our parents – and, thus, has no impact on the present. Indeed, we must reawaken the memory of our Baptism.”   http://www.indcatholicnews.com/news.php?viewStory=23921

It’s about Christ:   It is tempting on the Feast of the Baptism of the Lord to focus on our own experience of Baptism  and forget about Jesus and why he was baptised. Pope Benedict’s homily for this feast last year is a helpful focus:

“The Gospel account of the baptism of Jesus that we heard today in the reading from St. Luke, displays the path of abasement and humility that the Son of God freely chose in order to follow the Father’s plan, to be obedient to his will of love for man in all things, to the point of the sacrifice on the cross. Now an adult, Jesus initiates his public ministry, traveling to the Jordan River to receive a baptism of repentance and conversion from John. There occurs here something that might seem paradoxical in our eyes. Does Jesus need to repent and convert? Certainly not…” [read more of Benedict’s homily at this link]

If we know who Christ is, then we know who we are. Often focussing on ourselves can lead us in a spiral of introspection that ends us up where we started. So a homily on the Feast of the Baptism of the Lord, while an opportunity to focus on Baptism as the initial sacrament of the Church, will also focus on the Lord as the chief protagonist.

A good image:  In his Exhortation “The Joy of the Gospel, Francis gives some helpful tips for the preparation of the good homily. These include the advice that a “successful image can make people savour the message, awaken a desire and move the will towards the Gospel.” par. 157. Here are some early images of baptismal fonts that give a powerful visual image of baptism as a death (these early fonts are graves dug in the shape of a cross) and a birth (waters of new life) 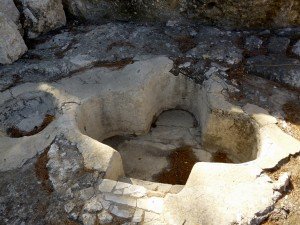 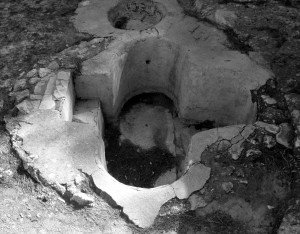 Baptism is not primarily about family and friends gathering to celebrate the birth of a child. Baptism is a birth, and it is a death, and it is the transformation of all that appears as the barrier of death, into a threshold for new life. The one who is baptised needs never fear death (an any of its daily forms, not at the end of earthly life)

If you are preaching to the English Literature Department of a High School or University you could develop these grave / resurrection images with reference to T.S. Eliot’s Journey of the Magi, a poem for last Sunday’s Epiphany feast.  Eliot highlights the fact that once we have been encountered by Christ, we are no longer at ease in a world without Christ where an ‘alien people clutch their gods’. This is so often the challenge for us who are baptised and who desire greater intimacy with Christ. The simple fact is that those who are baptised WILL feel the “hard and bitter agony” of apparent isolation from the masses in a secular world since we are different. We have been claimed by Christ and for Christ, and we are different BUT isolation we might feel is a fantasy; the evil spirit is tempting us with the classic “if you follow Christ fully you will be lonely” temptation. In fact the opposite is the truth. The reality is that we are not alone, and there is no greater intimacy than friendship with others who have been claimed by Christ and now know and live this fact.

…were we led all that way for
Birth or Death? There was a Birth, certainly
We had evidence and no doubt. I had seen birth and death,
But had thought they were different; this Birth was
Hard and bitter agony for us, like Death, our death.
We returned to our places, these Kingdoms,
But no longer at ease here, in the old dispensation,
With an alien people clutching their gods.
I should be glad of another death.

Journey of the Magi.   TS Eliot

Who will hear this homily?   What are the joys, hopes, griefs and anxieties of those who will be hearing this homily?