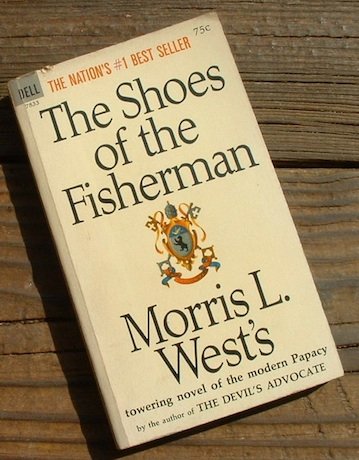 “Truth is stranger than fiction.”

Tonight I watched the movie again. In fact I’ve seen it several times before, and each time I appreciate more of the West genius with so many insightful lines like the family member commenting to the visiting incognito pope: “the dying is easy, it is the living that defeats us.”

I am sure that those who saw the movie at the time of its release knew that it was only a tale of Morris West’s imagination, and that much of his portrayal of papal life could never be reality. But it is remarkable that only fifty years after the publication of the book, much that was then considered to be fantasy, has become reality.

The film tells of a Russian bishop, Kiril, who after release from Soviet imprisonment, and work in a Siberian labour camp, was (even though non-Italian) was elected pope, refused the triple tiara,  and took an active role in breaking down oppressive communist regimes. Just ten years after the film was first screened, the world actually had a non-italian pope from a communist country (Karol – even the Christian names are similar – Wojtyla of Poland), who had spent time labouring in a Krakow limestone quarry, and after being elected pope in October 1978 refused the triple tiara and was a key player in the breakdown of communism.

Since the election of John Paul II we have had two more non-Italian popes, who each in their own way continued to develop and change the papal role and style. Think of Pope Benedict’s penchant for informal interviews, and Pope Francis’ courage in addressing the church’s communication and administration flaws. Much of this ‘new style’ was also imagined by Morris West, and one could be forgiven for thinking West was the scriptwriter for recent popes. The final scene in the movie is remarkably similar to Francis’ “I wish for a Church that is poor” address at the start of his pontificate.

As I think about this I’m reminded of the common resistance to new insights and suggestions: “we can’t do it that way – why not – because we have never done it that way before!” But as Byron and others have commented, truth is stranger than fiction. All it takes for what is impossible to become a reality, is that prophetic dreamers have the courage to live for the better realities that they imagine.