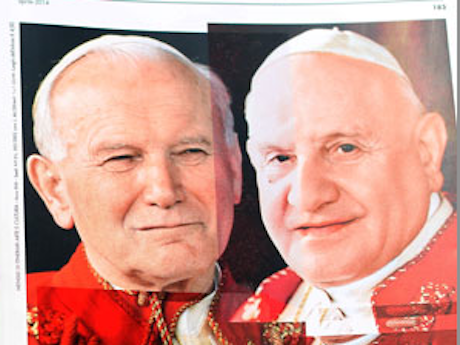 Pope Francis has just finished preaching the homily at the Mass of canonization of Saint John XXIII and Saint John Paul II.

The phrase that touched me most deeply was used by Pope Francis when speaking of Saint John XXIII’s courage in calling the Second Vatican Council. Francis said that the pope had an “exquisite docility” to the Holy Spirit. This term provided a smooth segue to Pope Francis comments about Saint John Paul who he referred to as the pope of the family.

In his homily Pope Francis said that while both of the new saints lived in a turbulent and troubled century, they were never overwhelmed by these events since they were not afraid to look upon the wounds of Jesus. They were not scandalized by the cross and they saw Jesus in every person who suffers and struggles. In these two new saints the hope and joy which filled the disciples of Jesus at Easter was visible.

This hope and joy was palpable in the early Christian community in Jerusalem. It was a community which lived the love and mercy at the heart of the gospel lived in fraternity and simplicity. This is what the Second Vatican Council set before us.