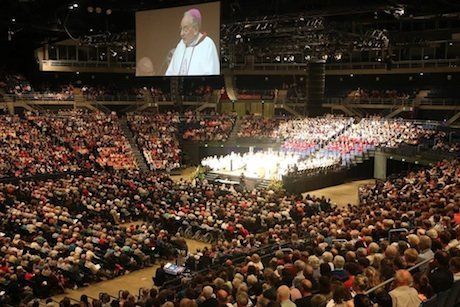 In recent months I have had the opportunity to be with many people of faith in several different countries: New Zealand, Australia, Asia, United States and Europe. Earlier today in St. Peter’s Square I was with tens of thousands of people from every part of the world. My experience is that something new is happening: there is a rebirth of faith in Jesus Christ, and a lively excitement especially among young people who are coming to faith in Jesus as a life-giving alternative to the limitations and fears of a secular society.

Last week I read an article written by a prophet of doom forecasting nothing but prevarication and ruin for the church and the world! (you might recognize that language from Saint John XXIII address to the opening of the Council).  This writer has not had the good fortune to experience the great signs of life and hope that have inspired me in recent months.

I was reminded of an interview I was asked to do a couple of years ago for Radio NZ. The interviewer had read a survey suggesting that religion was about to become extinct. He asked me what I thought…

You can hear the interview at this link: Empty Churches & Extinction of Religion? Radio New Zealand