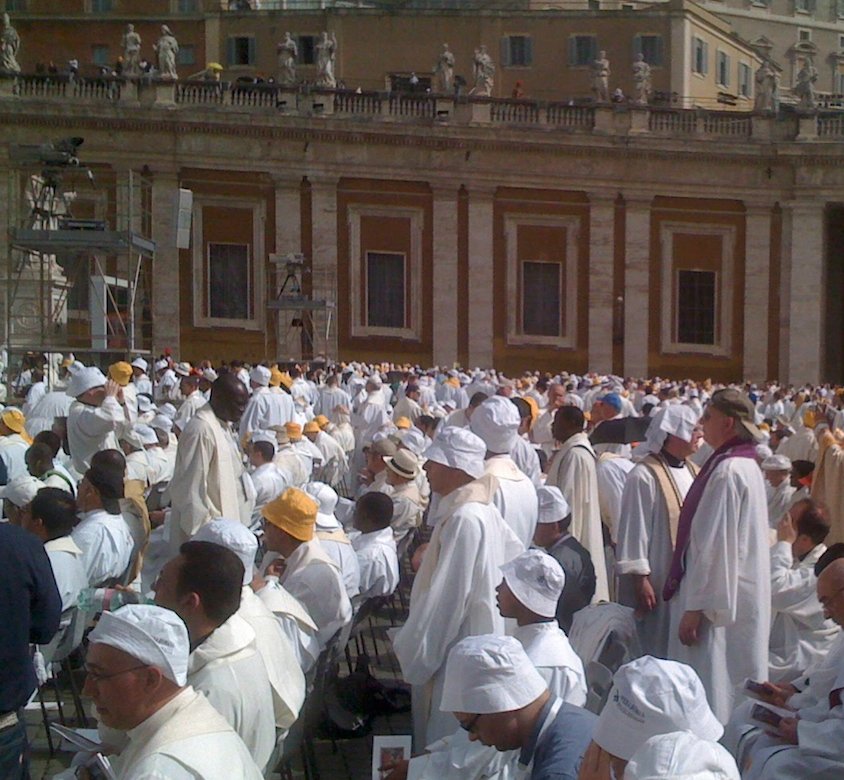 I have a few great memories of earlier years’ celebrations of today’s feast of the Sacred Heart. Five years ago on this feast I was privileged to be in St. Peter’s Square in Rome with Pope Benedict and around 15,000 priests to celebrating the conclusion of the Year of the Priest.

Today, five years on, I am privileged to be studying with a group of younger people including many priests (mostly in 20’s & 30’s) studying Liturgy, a field that Pope Benedict contributed so much to. During each academic year the University of St Mary of the Lake, Mundelein, is home to over 2oo seminarians. In the Summer months around 40 students arrive to study at the Liturgical Institute.

Back to St. Peter’s five years ago…here is my foodforfaith posting from that day.

It is impossible to communicate to someone who was not present, the joy among priests at this morning’s gathering of priests with the pope. It was an extraordinary gathering of more than almost fifteen thousand extraordinarily ordinary men.

Soon after 8am I joined the queue’s of priests waiting to pass through security into the Paul VI auditorium for vesting. Then for an more than an hour we waited and prepared for this Mass for the Feast of the Sacred Heart to close the Year of the Priest.

The time of waiting was a time of conversation and prayer. Everyone was waiting to meet everyone else. Unlike last night, this morning I was surrounded by priests who did not speak English, but still there was a strong fraternity and clear common purpose and goal in life.

The diversity of priests was most visible. I suspect I was in the older half. There were priests in cassocks and priests in Jeans. Priests with beards and priests with earrings. Priests showing the effects of years in missionary fields and priests fresh faced and young. As we vested the alb covered much of the initial difference, but a word or two of conversation with those around revealed that this group was as representative of the human population as any group in any society…

…with one notable exception: once the Mass began we were all focussed on one action. Clearly for all of us who filled the square this morning, the Mass is the most important thing.

In the moments before Mass there was conversation, photos and phone calls. Once the Mass started there was something of ultimate importance happening. In the midst of our diversity we were united.

Pope Benedict in his homily at the Mass concluded:

The liturgy of the Solemnity of the Sacred Heart of Jesus also permits another phrase, similar to this, to be used as the communion antiphon. It is taken from the Gospel of John: Whoever is thirsty, let him come to me. And let the one who believes in me drink. As the Scripture has said: “Out of his heart shall flow rivers of living water” (cf. Jn 7:37ff.) In faith we drink, so to speak, of the living water of God’s Word. In this way the believer himself becomes a wellspring which gives living water to the parched earth of history. We see this in the saints. We see this in Mary, that great woman of faith and love who has become in every generation a wellspring of faith, love and life. Every Christian and every priest should become, starting from Christ, a wellspring which gives life to others. We ought to be offering life-giving water to a parched and thirst world. Lord, we thank you because for our sake you opened your heart; because in your death and in your resurrection you became the source of life. Give us life, make us live from you as our source, and grant that we too may be sources, wellsprings capable of bestowing the water of life in our time. We thank you for the grace of the priestly ministry. Lord bless us, and bless all those who in our time are thirsty and continue to seek. Amen.