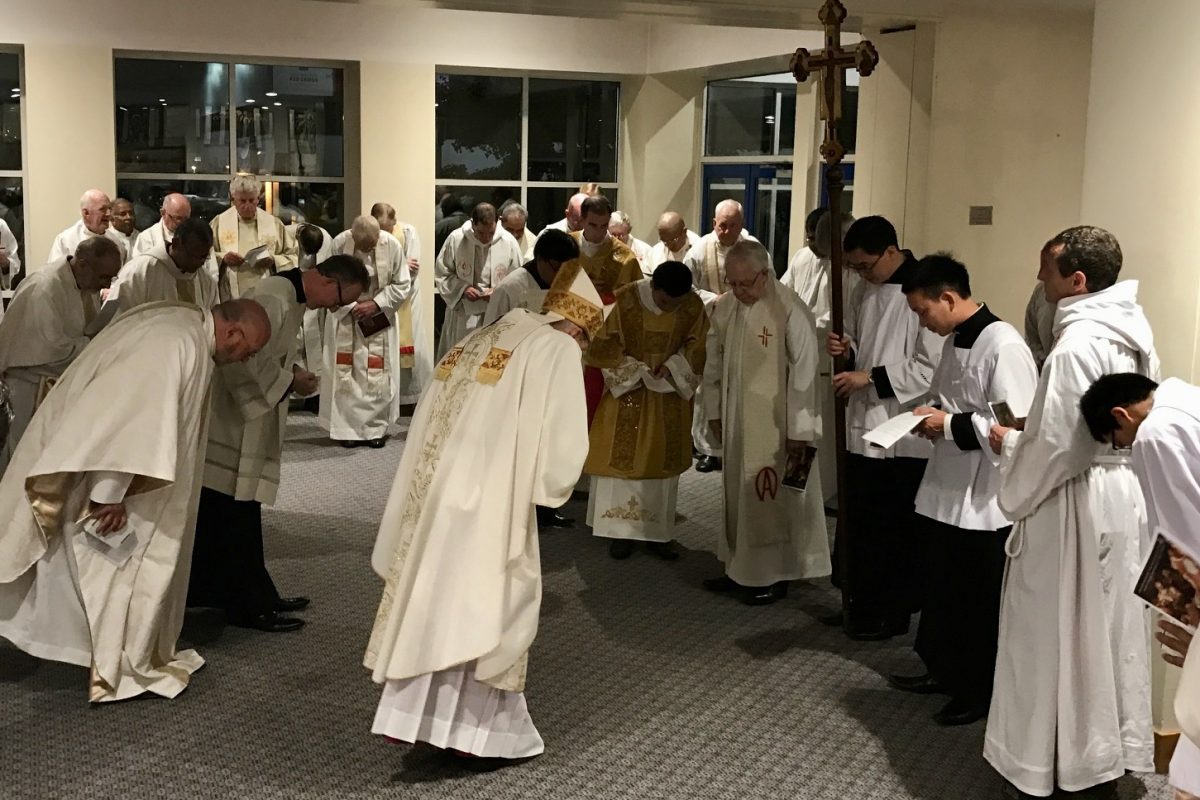 The Monday evening of Holy Week is a highlight for a priest in the diocese of Christchurch.

At 5 in the afternoon we gather to celebrate the Sacrament of Reconciliation together. It is both humbling and moving to be a brother among brothers as we confess our sin and receive God’s forgiveness through a brother priest.

A meal together follows, then we gather with parishioners from around the diocese for the Mass of the Chrism where the oils to be used in the celebration of the sacraments in the parishes of the diocese in the year ahead are blessed, and we priests renew our priestly commitment.

At the Mass the homily (tonight given by Bishop Emeritus Basil Meeking and printed in blue below) focusses on the meaning of priesthood in the Church.

The photos on this page include priests gathered in the Burnside church of Christ the King for the Sacrament of Reconciliation, and bishop and priests bowing to the processional cross at the conclusion of the Mass.

The most significant moment for me tonight was seeing so many people who had gathered to support us priests.  During the prayers of recommitment the bishop called on the people present to support their priests:

As for you, dearest sons and daughters
pray for your Priests,
that the Lord may pour out his gifts abundantly upon them
and keep them faithful as ministers of Christ the High Priest
so that they may lead you to him
who is the source of salvation.

and then the people present responded:

Thank you to your all for your support and for your prayer. I need it.

And I was also surprised and moved by the number of people who came up to me to express their gratitude at these daily Lenten reflection.  I am delighted you are finding my offerings helpful. 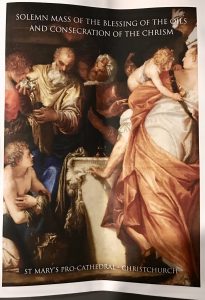 The bishop who blesses the Oil of the Sick, the Oil of Catechumens, and consecrates the Holy Chrism during the Mass in Holy Week is directed to speak in the homily about the ordained priesthood. Preparing to do that brought to my mind an incident of some years ago when Walker Percy, a Catholic writer and novelist in the USA, was talking to a group of seminarians, He said: “I notice there are not many of you seminarians; the answer to the present shortage of priests however is not to relax the standards of priestly life. I am pleased you have told me, that is not at all what you want. It is a blessing that you young men today are not seeking an easy path, but one that is made exhilarating by a demanding challenge”.

The Catholic priesthood is indeed a demanding but a thrilling challenge because the Church herself is not just a human institution but is supernatural, she is in fact part of the revelation given by God; so is the priesthood itself. Christ the Son of God, made present in the Church, is the heart and soul of the Catholic priesthood. Among the images from Scripture and the Tradition which keep us aware of its divine institution, has been the term, “servus Christi”, the priest is the servant of Christ.

Pope St. John Paul II explained that when he said “the priest minister is a servant because he activates the Church’s sacramental signs of the presence of Christ; he appears in the structure of the Church as a sign of the absolute priority and gratuitousness of the grace given by the risen Christ. He is to be a visible continuation and sign of the enduring and ever new source of salvation brought into the world by Jesus Christ the Head of the Church who is himself the Saviour.” The image of the priest – servant has its source in the hymn to Christ quoted in the Letter to the Philippians. St Paul uses it to inform us that Christ the Son who is equal to God took on the condition of a servant and became a slave for us in our need of salvation. The priest as servant is so, in relation to Christ; he has been ordained for the  service of the Lord. a service that reaches into a man’s very being. The Second Vatican Council speaking of this keeps saying, “the ordained priest is configured to Christ”, that means he takes on inwardly the shape of Christ the servant saviour. He is in a new relationship with Christ which enables him to act in the person of Christ the Priest and Head of the Church. Because he has become servant from, through and with Christ, the priest is also equipped to serve the followers of Christ in the community of the Church. This is not a secular engagement; it is because he belongs to Christ in such a unique manner that he can belong in a radical sense to Christ’s people, able to dedicate himself to the profoundly and absolutely, quite beyond a simply human commitment.

It is in the liturgy that the ordained priest is most clearly seen as a priest; the liturgy is the action of the whole Christ, head and members, on earth and in heaven, that is the Church. In the liturgy the priest is most fully the sign and instrument of Christ the priest. truly his servant. Christ entrusts his priest with the sacred symbols that make present the mystery of salvation. In celebrating the liturgy the priest has to do so then in fidelity to the Church and to her reverent tradition of worship; he is the servant of Christ’s holy gifts; he is not the actor in a drama he himself devises. The living heart of the Church’s liturgy is the Mass. Vatican II tells us it is “the source and summit of the Christian life.” We priests are immensely privileged to be Christ’s Eucharistic and sacrificial ministers. The Catechism of the Catholic Church says: “in the Eucharist is centred the whole spiritual good of the Church, namely Christ himself; the Eucharist is the sum and summary of our faith.” (CCC 1327) It is to the Mass that we priests commit our lives. We are Mass priests or we are nothing. As a priest there is nowhere I act more intimately in the person of Christ than when I offer the Mass; to do so fervently and with evident faith and every day is the bench mark of my priestly life. The Mass is the greatest of all prayers and there is nothing better I can do for the people I serve than to offer the Mass. Perhaps the greatest pastoral challenge we face today is to rekindle in our people a vibrant faith in the wonder of the Eucharist; but I cannot stimulate such faith unless I have it myself; for instance, do I believe that our Lord is really and truly present in the Blessed Sacrament, to be adored, in the first place by me as priest?

God has spoken the definitive word of love to the world in his Son Jesus Christ. The priest, as servant of Christ must let that divine love shape his life and his ministry. So he must be teacher and preacher. He must be able to speak from his own experience of being grasped by God. We cannot help but speak of what concerns us ultimately. The priest above all others is the one who cannot help but speak about the ultimate concern that is God’s burning love for us. Like the prophet Isaiah his lips have been seared by the fire of God; like Ezekiel he should have tasted God’s word. taken it into his flesh and bones and found it both sweet and overwhelming. That is why the faithful want good homilies from their priests; it is a reasonable demand because they sense by faith that the priest is the bearer of the mystery of salvation of which they desire to know more, into which they want to be drawn deeper. So the priest must himself be conformed to the Word who is Jesus Christ. So he has to be a lifelong student of the Sacred Scriptures and of the great writings of the Catholic tradition; the Catechism of the Catholic Church, which should be his constant reference book will keep him in touch with them

In his service of Christ, the priest is, under Christ, a kind of co-mediator between heaven and earth. So if he is to communicate something of the all-embracing yet hidden mystery of Being, who is God, he must be constantly in the presence of God. He must take with utmost seriousness the urgent advice of that great preacher, St Paul, to pray continually, to direct the whole of his being towards God. He should not be afraid to engage even in the prayer of contemplation. I am not talking about a monk called to live the contemplative monastic life of prayer. I am talking about the parish priest who as servant of Christ and of his Church has to be formed by prayer in a way that aligns him with Christ  and that penetrates every fibre of his being; he will be able to satisfy the demands made on him by his parishioners if he learns first to listen to what Christ has to say to him.

The vocation of the priest is to initiate his people into the mystery who is God. For that he has to be an authentically religious leader for them. It was one of the mistakes of the time after Vatican II that some priests and people wanted to turn the priest into a psychologist. a sociologist, a social worker, a counsellor. anything but a uniquely religious leader. That was part of the secularisation that infiltrated the Church and led numbers of priests and people away from the divine mystery that is the heart of the Church. It was as though they no longer really believed in God but instead relied on their own capabilities and qualifications. It is all to the good if the parish priest has good human talents and is well qualified but it is first of all as pastor that he will bring his people to God. That is why God, through the prophet Jeremiah promised his people: : “I will give you pastors after my own heart.” That was why Pope Emeritus Benedict in his brilliant simplicity. answered the question: What does the priest bring to the world?” by replying: “He brings God.”

It is demanding, it is wearing to be a good priest in today’s world: but if we can hold on to that truth. “The priest brings God,” if we reflect on it, pray about it, that will keep alive in us the joy of being a priest. Who of us for instance has not known the joy that fills our hearts when Christ uses us his priestly servants, despite our sins and failings, to raise up and bring home a brother, a sister in the faith who has fallen away. It is not a noisy joy, nor is it the joy of high spirits; it is a quiet, deeply peaceful joy that comes from faith.

At the end of this week, with all of you dear brothers and sisters, we priests will celebrate the Lord’s resurrection which is the source of the sustaining and enduring joy of his whole Church; then, that Easter joy of Christ and his Church will be with us his priestly servants, no matter the extra demands our parish puts on us at this season. It is the joy that suddenly filled the hearts of the frightened, discouraged apostles when the risen Jesus came to them on Easter evening and said: “Peace be with you; it is I, myself.”  In that joy we can know in the depths of our hearts how wonderful it is to be his priest.