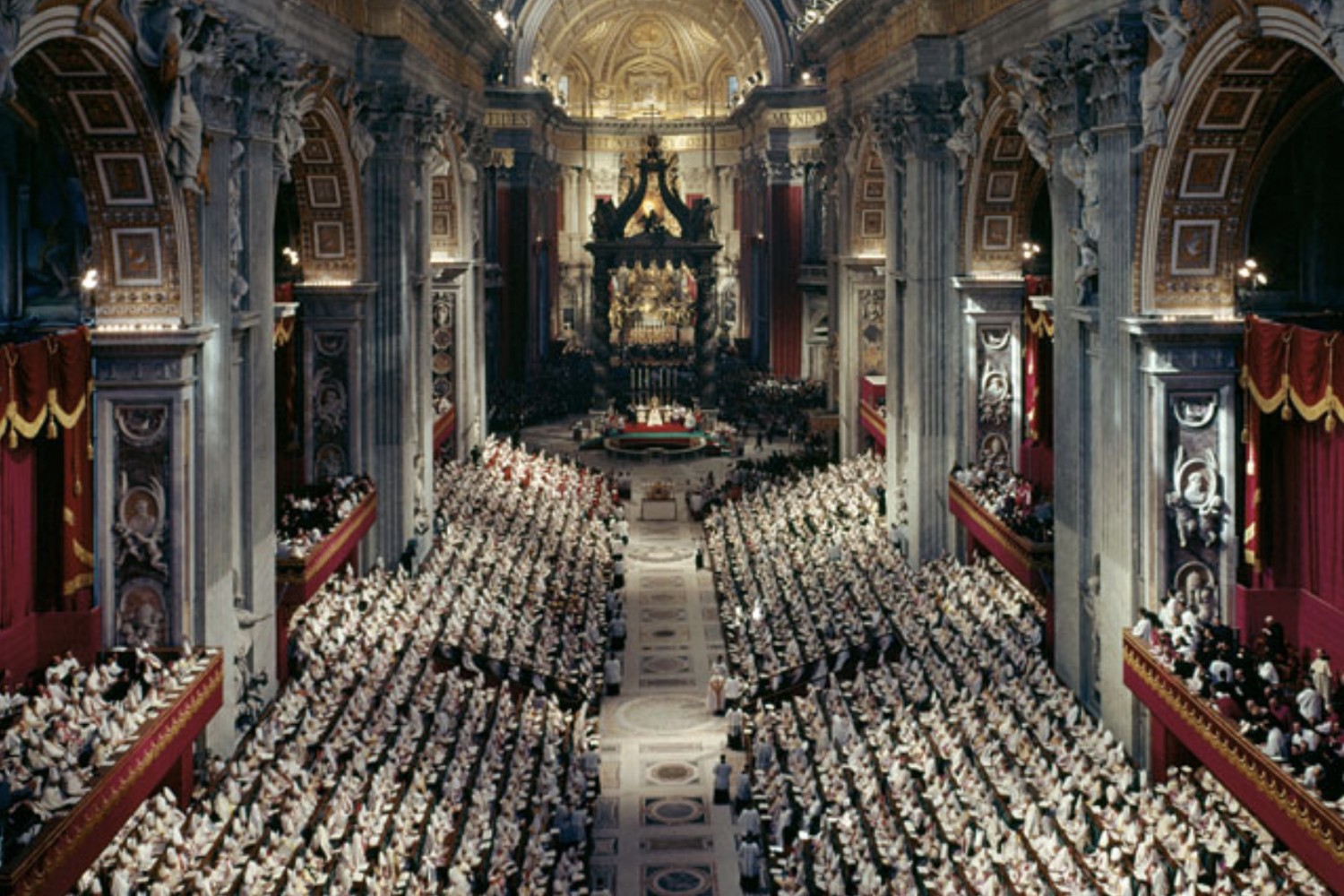 Sixty years ago today Saint (Pope) John XXIII shocked the cardinals of the curia when, just three months after his election as pope, he announced that he was calling an Ecumenical Council of the church.

The pope made this announcement during the celebration of Vespers (Evening Prayer) in the basilica of St. Paul Outside the Walls, for the feast of the Conversion of St. Paul, sixty years ago today on 25 January 1959.

The news came as a shock because, as the pope reflects in his journal, after he first had the inspiration (his word) to call a Council only a few days earlier and mentioned it to a couple of his cardinal advisors, he had the impression that they thought his idea was nothing more than the foolish ramblings of an old man. At that point the pope decided to keep the idea to himself until that evening in St Paul’s basilica two weeks later, sixty years ago today.

As he commented in his opening address to the Council almost four years later:

“The decision to hold an ecumenical council came to us in the first instance in a sudden flash of inspiration. We communicated this decision, without elaboration, to the Sacred College of Cardinals on that memorable January 25, 1959, the feast of St. Paul’s Conversion.”

The reason that the news was such a surprise was that it was widely accepted that the Catholic Church was in pretty good shape in the late 1950’s. Churches were full on Sundays and schools and other Catholic institutions were flourishing. Record numbers were entering seminaries and religious houses to serve as priests and religious sisters and brothers.

Given that the previous twenty Church councils had each been called to address a particular crisis, it is no surprise that people were surprised to hear Pope John’s announcement. In his own words on that opening day (11 October 1962) he was aware that beneath the veneer of success, a spirit of fear threatened to undermine and overwhelm the church:

“In the daily exercise of Our pastoral office, it sometimes happens that we hear certain opinions which disturb us—opinions expressed by people who, though fired with a commendable zeal for religion, are lacking in sufficient prudence and judgment in their evaluation of events. They can see nothing but calamity and disaster in the present state of the world. They say over and over that this modern age of ours, in comparison with past ages, is definitely deteriorating. One would think from their attitude that history, that great teacher of life, had taught them nothing. They seem to imagine that in the days of the earlier councils everything was as it should be so far as doctrine and morality and the Church’s rightful liberty were concerned.

“We feel that We must disagree with these prophets of doom, who are always forecasting worse disasters, as though the end of the world were at hand.

“Present indications are that the human family is on the threshold of a new era. We must recognise here the hand of God, who, as the years roll by, is ever directing people’s efforts, whether they realise it or not, towards the fulfilment of the inscrutable designs of His providence, wisely arranging everything, even adverse human fortune, for the Church’s good.

A young Fr. Joseph Ratzinger, 35 in 1962, (later Pope Benedict XVI) was present at all four sessions of the Council. On this anniversary it is helpful to hear from his reflection in a German radio interview in 1969. These words are inspiring and timely for us in 2019 when we might notice decline in visible signs of church life. In these words the future Pope Benedict directs us to the heart of the purpose and mission of the church:

“The future of the Church can and will issue from those whose roots are deep and who live from the pure fullness of their faith. It will not issue from those who accommodate themselves merely to the passing moment or from those who merely criticise others and assume that they themselves are infallible measuring rods; nor will it issue from those who take the easier road, who sidestep the passion of faith, declaring false and obsolete, tyrannous and legalistic, all that makes demands upon men, that hurts them and compels them to sacrifice themselves. To put this more positively: The future of the Church, once again as always, will be reshaped by saints, by men, that is, whose minds probe deeper than the slogans of the day, who see more than others see, because their lives embrace a wider reality. Unselfishness, which makes men free, is attained only through the patience of small daily acts of self-denial. By this daily passion, which alone reveals to a man in how many ways he is enslaved by his own ego, by this daily passion and by it alone, a man’s eyes are slowly opened. He sees only to the extent that he has lived and suffered. If today we are scarcely able any longer to become aware of God, that is because we find it so easy to evade ourselves, to flee from the depths of our being by means of the narcotic of some pleasure or other. Thus our own interior depths remain closed to us. If it is true that a man can see only with his heart, then how blind we are!

“Let us go a step farther. From the crisis of today the Church of tomorrow will emerge — a Church that has lost much. She will become small and will have to start afresh more or less from the beginning. She will no longer be able to inhabit many of the edifices she built in prosperity. As the number of her adherents diminishes, so it will lose many of her social privileges. In contrast to an earlier age, it will be seen much more as a voluntary society, entered only by free decision. As a small society, it will make much bigger demands on the initiative of her individual members… But in all of the changes at which one might guess, the Church will find her essence afresh and with full conviction in that which was always at her centre: faith in the triune God, in Jesus Christ, the Son of God made man, in the presence of the Spirit until the end of the world. I

“The Church will be a more spiritual Church, not presuming upon a political mandate, flirting as little with the Left as with the Right. It will be hard going for the Church, for the process of crystallization and clarification will cost her much valuable energy. It will make her poor and cause her to become the Church of the meek. The process will be all the more arduous, for sectarian narrow-mindedness as well as pompous self-will will have to be shed. One may predict that all of this will take time. …

Men in a totally planned world will find themselves unspeakably lonely. If they have completely lost sight of God, they will feel the whole horror of their poverty. Then they will discover the little flock of believers as something wholly new. They will discover it as a hope that is meant for them, an answer for which they have always been searching in secret.

“And so it seems certain to me that the Church is facing very hard times. The real crisis has scarcely begun. We will have to count on terrific upheavals. But I am equally certain about what will remain at the end: not the Church of the political cult, which is dead already, but the Church of faith. It may well no longer be the dominant social power to the extent that she was until recently; but it will enjoy a fresh blossoming and be seen as man’s home, where he will find life and hope beyond death.

On this 60th anniversary of the calling of the Council, let’s pray the prayer that began every day of the four-session, four-year gathering of the Second Vatican Council:

We stand before you, Holy Spirit,
conscious of our sinfulness,
but aware that we gather in your name.

Come to us, remain with us,
and enlighten our hearts.
Give us light and strength
to know your will,
to make it our own,
and to live it in our lives.

Guide us by your wisdom,
support us by your power,
for you are God, sharing the glory of Father and Son.

You desire justice for all;
enable us to uphold the rights of others;
do not allow us to be misled by ignorance
or corrupted by fear or favour.

Unite us to yourself in the bond of love
and keep us faithful to all that is true.

As we gather in your name, may we temper justice with love,
so that all our discussions and reflections
may be pleasing to you, and earn the reward
promised to good and faithful servants.

We ask this of You who live and reign with the
Father and the Son, one God, for ever and ever.