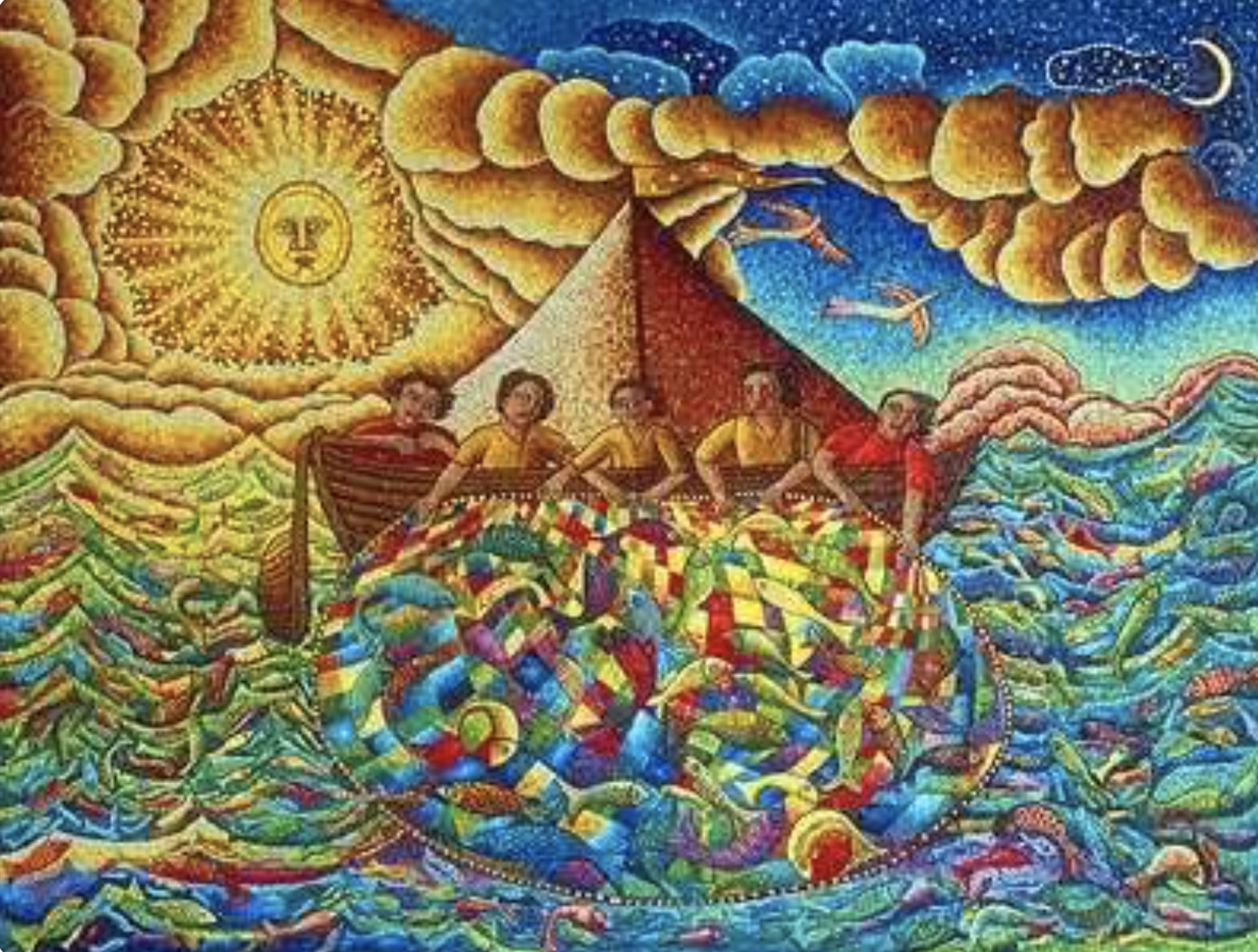 Every day of this Easter Octave week the gospel readings present one of the resurrection encounters between Jesus and his disciples. Today’s reading tells of an early morning as Jesus’ friends return after unfruitful night’s fishing.

Keep the context in mind. These disciples will have some guilt at their part in the tragic death of their friend a few days earlier, feeling responsible because they abandoned Jesus when he most needed them.

They have heard that he has risen from the dead and he has appeared to them (ref. John 20) but they are still struggling to know what this means. It’s probable that they are even doubting their earlier experience of the risen Jesus. One sign of their uncertainty is that some of them have returned to their previous work as fishermen.

Peter has already been forgiven by Jesus, and this personal experience of undeserved love has transformed him into a fearless preacher of the power of Christ.

Peter doesn’t pull any punches in today’s first reading when standing as a prisoner before the rulers, elders, scribes and Annas the high priest:

And then early one morning at the Sea of Tiberius Jesus calls to them from the shore: Have you caught anything friends?

After they had proved that they were not good friends (denying, abandoning etc.) Jesus still calls them friends.

I like the ordinariness of the question, Have you caught anything friends? Jesus asks them not about their level of faith and love (that will come soon) but about fishing, something they knew about, their ordinary practical human reality.

Jesus asks the same ordinary kind of question that any of us might ask of friends or strangers in the same situation.

His question gives them a chance to express their feeling at their lack of success. I imagine that there would have been frustration and humour, and even laughter when Jesus (even though at this stage they did not know this was Jesus) suggests: Throw out the net to starboard and you’ll find something.

It’s significant that they were so desperate for fish that this suggestion of one they thought to be a stranger was enough to motivate them to try again, even though they were tired.

Their success was immediate: they dropped the net, and there were so many fish that they could not haul it in leading John to say to Peter “It is the Lord!”

A bit of exercise:

After the resurrection of Jesus he encouraged those he encountered to “go and find the others.” We need to spend time with other people who seek to encounter Christ in the routines and demands of life.

The response to my invitation to meet in cafes and bars has been very positive. Yesterday six people met in a cafe in Ashburton and the invitations for the next few days are below. Try it, either by turning up at one of the appointed places or by suggesting your own time and place and emailing me the detail so I can share your invitation with others.

The agenda for each conversation is simple: share about your life and faith.

Image above: John August Swanson. Detail at this link.